Finding the perfect rental property can be stressful. After all there’s so much choice available and a wide range of factors to consider. Should you choose an inner-city or suburban location? A flat or a house? Do you need a garden, or will a balcony suffice? Should you choose a furnished or un-furnished property?

However, as well as considering factors specifically about the property itself, have you ever stopped to think about which location might be best for you in terms of the industry you work in and how this could affect things for you financially?  Is Manchester the most economically-savvy place to live if you are a construction worker? Or would your bank balance be in better condition if you moved to Newcastle for a banking role?  HomeLet set out to find the best cities in the UK to rent, based on average living costs against average starting salaries for various industries.

Here’s what we found…

How much does it cost to live?

We all have living costs to consider, but it seems that some of us have more than others, dependant on where we live.  Unsurprisingly, those in London have the lion’s share, with a whopping annual individual living cost of £25,438. Taking into consideration rent, utility bills, food and drink, clothing, household goods, health and transport costs, the figure is over double the cost of living in Newcastle, which works out at £12,460.

Other more expensive locations to live include Southampton (£20,128) and Bristol (£17,017), suggesting that the south/north divide can be prominent when it comes to the cost of living. 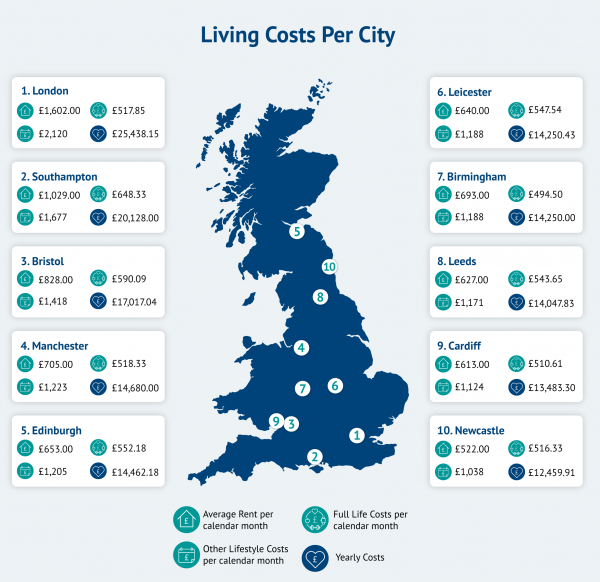 Where should my job take me?

With low living costs and close proximity to both beautiful countryside and a number of beaches it seems that Newcastle could be an even more popular renting destination for certain professions than others. Our figures show that those working in construction could particularly benefit from living in this thriving northern city, having on average £28,092 a year remaining from their pay after all living costs have been absorbed. Similarly, those working in engineering roles would be left with £20,040 to play with once all the essentials had been paid out.

For those working in design, Cardiff seems like a good shout as a place of residence, with the average designer having around £24,016 worth of disposable income each year. A huge difference in comparison with a designer of the same role living in London, who would only have £12,062 left to spend, save or invest.

It’s not just designers who should think twice about renting a place in the capital. It seems that London is the least cost-effective home city for those in the education, customer service, admin, catering and media industries too, with those in teaching and education ending up with only £2,438 of disposable income after their living costs have been factored in. That’s £203 per month of disposable income, which could make things less manageable, especially for those with a family to consider.

Should I seriously consider moving to a new city?

With stark differences apparent in living costs across cities in the UK, as well as large fluctuations in starting salaries received by different people doing similar jobs in different cities, it does seem that this should be considered. An accountant who chooses to live in Manchester could potentially be better off by just under £13,000 per year, in comparison to an accountant who chooses to live in Southampton, with just £872 disposable income for the same year!

Whilst money should never be the driving factor in deciding where to settle down, affordability should always be taken into consideration along with family support, friendship groups and the availability of local amenities. It is therefore important to ensure you will be comfortable living on a certain salary, having compared it to the amount you are likely to be spending on things such as rent, utilities, tenant’s insurance and other necessities.

If having a decent amount of disposable income is a lifestyle priority for you, then it might be a case of thinking about moving to a new UK city, or even more drastically, changing your career path altogether…