There are a lot of landlords in the UK these days. In fact, according to HM Revenue & Customs, there were almost two million back in 2013/2014. But what are the characteristics of the average landlord or buy-to-let investor?

There's been a number of studies looking at the average landlord and we've analysed some of the findings to shed some more light on what agents can expect from the typical buy-to-let landlord.

How many rental properties do they own - is the number of landlords with just one property falling?

Over that past decade we’ve seen continued growth in the number of people living in the Private Rented Sector (PRS). According to the Department for Communities and Local Government’s (DCLG) Private Landlord Survey 2010, 40% of landlords owned just one rented property.

The CML's recently published survey suggests that, between 2010 and 2016, the proportion of landlords who managed just one property fell from 78% to 63%, while the proportion managing 2-4 properties increased from 17% to 30%.

Whilst most landlords in the UK still appear to have just one investment property, the market’s becoming more experienced and more investors are expanding their property portfolios.

Is being a landlord their full-time job?

This issue seems a lot more cut and dried. According to the CML's survey 95% of respondents don’t consider letting property to be their main business or occupation.

This remains in line with the Government's last Private Landlords Survey, carried out in 2010, where 92% of landlords surveyed said they didn't view it as a full-time role.

Without giving exact figures, the TDS' study declares that 'the majority of landlords are not full-time and either run a business or have another job'.

If the average landlord doesn't view letting rental properties as their job or number one business concern, this reinforces the important role that professional letting agents have to play in the market.

Do they use a letting agent?

Whether landlords view letting property as their profession leads nicely on to the next issue – letting agents.

The TDS study suggests that almost 40% of landlords still managed their property themselves, while 34% used agents for tenant finding and 27% hired an agent to fully manage their portfolio.

Considering a very high proportion of landlords don't view letting property as their main job, it seems there's still a sizeable portion who aren't yet using a managing agent.

How old are they?

According to TDS' report, private landlords are mostly over 55 years old and it's a similar picture when you come to look at our figures - with 55% of the 2,000 respondents to our landlord’s survey being over 51 years old. 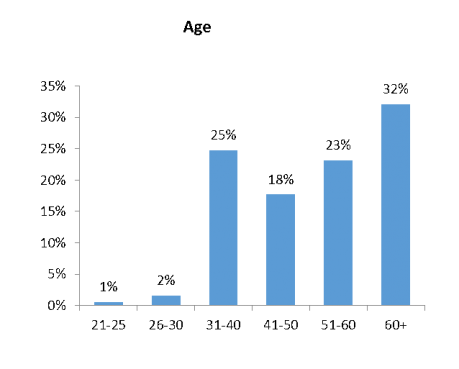 With many landlords around potential retirement age, they could be benefiting from the pension annuity changes and the growth rates in house prices seen since the 1980’s – either way they’re clearly an important demographic.

Did they intend to become a landlord?

Our findings from last year show that it depends largely on the landlord's age. For example, a whopping 61% of the landlords we surveyed, aged 31-40, became a landlord because of changed personal circumstances or marital status.

Meanwhile, 52% of pension investors were unsurprisingly aged over 60 and 52% of landlords who inherited a property – which they subsequently let – were also over 60.

The TDS report indicates that the trend of 'accidental landlords' is diminishing as more people become aware of the returns they can secure from a buy-to-let investment.

Over 60% of those surveyed by TDS said they'd always planned to use their current rental property as a buy-to-let.

These findings – particularly those from TDS – show that landlords are becoming more savvy and pro-active.

According to the TDS survey, these are what landlords listed as their primary incomes:

The DCLG Private Landlord Survey 2010, found that 79% of landlords earned less than 25% of their income from rents. The more recent CML data suggests that rents are now making up a higher percentage of a landlord’s total income, in the past six years the proportion of landlords receiving:

As the reliance on rental income grows, so too does the impact of issues like missed rental payments, vacancy periods or damage to a property.

The data suggests that whilst landlords are becoming more experienced, many don’t view their property investments as their full time job or primary income. When that’s coupled with the fact that up to 40% of landlords don’t use fully managed services, it’s clear that there’s still plenty of opportunity for professional letting agents to expand by meeting the growing demands of the market.

The data we looked at in this post comes from: