A recent survey conducted here at HomeLet has revealed what tenants really think about the UK’s rental market. The survey, conducted in October, was answered by 14,782 tenants, giving us a unique insight into what they think about their landlord or letting agent, the property they rent and the state of the UK’s housing market in general. Here’s what we found:

Part one: The UK's rental market

In part one of our survey, we endeavoured to learn more about who’s renting in 2015, what channels they’re renting through and why they’d chosen their specific property. In addition, we also asked more about why they were currently renting, rather than buying, and what their future plans might be.

1) Who do you rent through?

The majority of respondents rented via a letting agent, with over double the amount of tenants renting through a letting agent rather than directly from a private landlord.

2) Are you happy with your landlord or letting agent?

It was positive news for landlords, letting agents and tenants in our question about tenant happiness, with 78% of tenants who rent through a letting agent either ‘happy’, ‘quite happy’ or ‘somewhat happy’ with the service they receive. For those renting from private landlords, this rose as high as 90%, showing us that the vast majority of tenants were happy with the services they receive.

3) When you chose your rental home, how important were the following factors?

When it comes to why tenants are renting their current properties, it’s clear from the survey results that the cost of renting a property is the most important consideration for many, with 86.6% of respondents telling us it was either ‘very important’ or ‘quite important’. Following this, low crime rates in the area and available parking were the largest contributory factors.

Of the 31% of tenants with children, 72% rated local schools as an important consideration.

4) Thinking of when you last moved properties, which of the following applied to your situation?

The survey also showed that many tenants are also moving of their own accord, rather than being asked to move out by their landlord. Over half (61%) of those who responded to our survey cited that it was their own decision to move from their last property, in comparison to only 13% whose landlords served them with a notice to quit.

5) Ideally, would you prefer to buy a home (either outright or via a mortgage) than to rent?

6) If you'd prefer to buy, what's stopping you from buying your own home?

(Respondents were asked to select the top three reasons)

Following on from the above, the survey explored why this might be. Perhaps unsurprisingly in the current climate, many tenants were unable to buy because they couldn’t afford a deposit, with 66% of respondents listing this among their top three reasons. Additionally, it appears as though tightened lending criteria was also a factor, with 29% of respondents saying that an inability to get a mortgage was a contributing factor that was stopping them buying their own home.

7) Are you currently saving for a deposit to buy a home?

8) If given the choice, would you prefer to live alone?

The tenants we surveyed were split on their preferred living arrangements, with 37% stating that they’d prefer to live alone, compared with 48% who’d rather live with someone else - such as a friend or a spouse.

9) How long do you intend to continue renting?

The findings reveal that the majority of tenants plan on renting for the long term, with half stating that they intend to continue renting for longer than a year.

10) Where did you first see the property you currently rent?

The survey reiterates how important property portals can be, with over half (55%) using Rightmove, and an extra 11% using Zoopla. Only 15% said they found their property through a high street letting agent, showing us the huge growth of online property marketing.

Some of the other responses included word of mouth, friends, Gumtree, Property Pal, and SpareRoom

As well as finding out about the rental market as a whole in the UK, our survey also set out to find what the tenants’ options were on their current situation, and their relationship with their landlords or letting agents. The results were interesting, painting the private rented sector in a very positive light, with most tenants reporting to be happy with their situation and living arrangements.

Overall, just over half of tenants felt as though they received either ‘good’ or ‘quite good’ value for money when renting. The results showed that there were some significant differences in the perception of value, depending on where people lived. In Northern Ireland, 67% of tenants felt that the rent represented value for money, but this dropped to 33% for tenants living in London.

2) 86% were happy with the standard of their rented home

3) 88% feel their landlord or letting agent is approachable

The data also reveals that the vast majority of tenants have a good relationship with their landlord or letting agent, with 88% describing them as ‘approachable’.

4) 88% feel their landlord or letting agent is contactable

When looking specifically at decoration, it appears as though tenants who rent directly from a private landlord have a greater chance of their requests to decorate a property being accepted, with 43% of landlords allowing decoration, compared with 32% of letting agents. Only a quarter of landlords had turned down a request, compared with almost a third of letting agents.

When it comes to tenancy terms, it appears as though the vast majority of tenants understand their rights and responsibilities - as well as the responsibilities of their landlords - with 84% of respondents stating that they understood their tenancy agreement.

7) Are you happy with the speed of repairs carried out on your property?

8) 13% of tenants have had their deposit withheld

9) Reasons why deposit was withheld

Of the deposits withheld, 32% were due to cleaning issues, while 10% were because of damage. We’ll be providing a summary shortly of the responses that were listed as ‘other’ - to provide further insight.

In conclusion, our survey's revealed the complexities of the current UK housing market.

With responses from almost 15,000 tenants, we’re able to conclude that the majority of tenants are happy in their rental property, with many feeling that it’s good value for money, with an approachable and contactable landlord or letting agent.

It also revealed that most people, who are currently renting, aspire to buy a home - with most planning on renting for the long-term while saving for a deposit for their own home.

About the tenants surveyed

1) Where's the location of the property you currently rent?

Our survey respondents came from a range of regions across the UK, providing us with a key insight into the property market as a whole, rather than just one specific region

2) How many adults currently live in your rented home?

From the responses, it was found that most rented properties are only home to either one or two adults. Overall, over half of rented homes contain two adults.

3) How many children currently live in your rented home?

Contrastingly, it appears as though the vast majority of rented homes contain no children, with almost 70% of respondents not having any children currently living in their rented home. 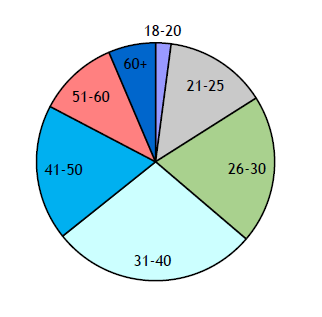 When looking at the age of the tenants surveyed, the largest proportion of tenants were aged between 31 and 41. Data from the HomeLet Rental Index, which looks at a much larger volume of data, shows that the average of a tenant in the UK is 34.