Following our well-received tenant satisfaction survey, which gave us a unique insight into the UK’s rental market, we recently surveyed landlords for their views on the private rented sector to understand their experiences. The survey, conducted in October, received 1,882 responses. Landlords were asked for their views on the UK’s rental market, their experiences with their tenants and what they thought about their letting agent. Here’s what the survey revealed.

About the landlords surveyed

Our survey spanned the entirety of the UK, receiving almost 2,000 responses in the process. As well as being nationwide, the survey also covered a vast variety of age groups, which allowed us to gain an accurate representation of landlords’ views on the private rented sector across a number of demographics. 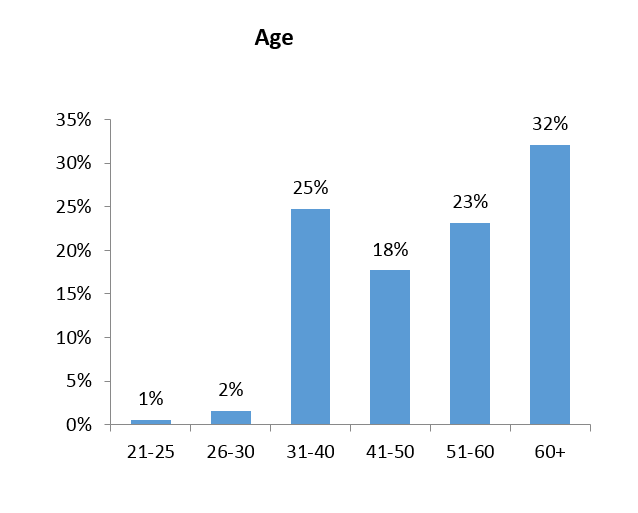 1) Are you happy with your current tenant(s)?

The first finding of our survey shows us that an overwhelming number of landlords are happy with their tenants. Overall, our survey revealed that 96% of respondents were either ‘very happy’, ‘quite happy’ or ‘somewhat happy’ with their current tenants. This shows us the great relationships that most landlords have with their tenants and also reaffirms the findings of our tenant survey, where 86% of tenants were happy with their landlords. Overall, the relationship between landlords and tenants seems mutually beneficial.

2) Have you ever had to deal with a problem tenant? 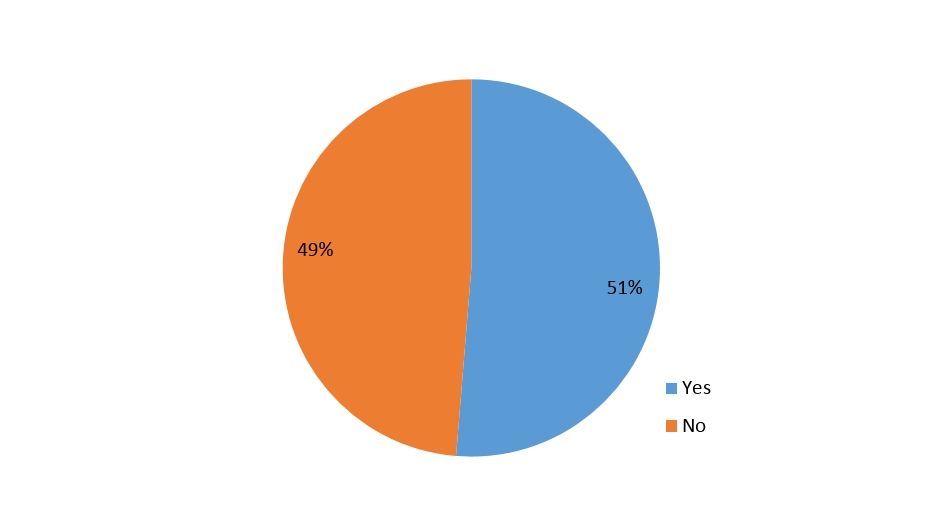 However, although 93% of landlords are happy with their current tenant(s), our survey found that over half (51%) of landlords had to deal with a problem tenant in the past.

3) Do you reference your tenants? 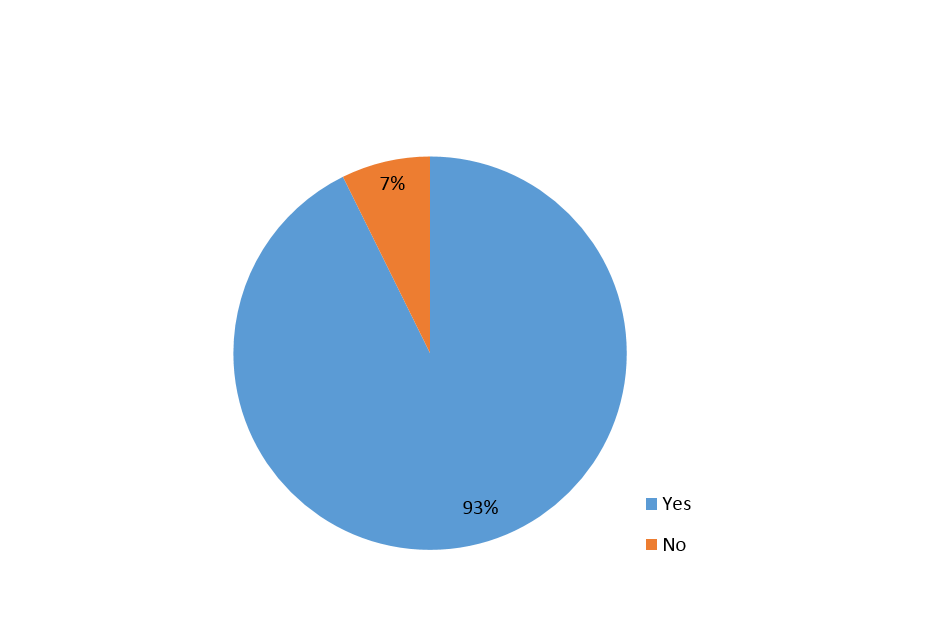 The fact that 96% of landlords are referencing their tenants potentially goes part way to explaining why so many are happy with their current tenants. Of the 135 landlords who did not reference their tenants, 55% didn’t do so because their letting agent dealt with that part of the process, while only 13% (22 landlords) didn’t ‘feel the need’ to do so.

4) Do you use a tenancy deposit scheme?

Of the 1,882 landlords surveyed, only 73 do not use a tenancy deposit service. 4% did not use one at all, while a further 5% were unsure. 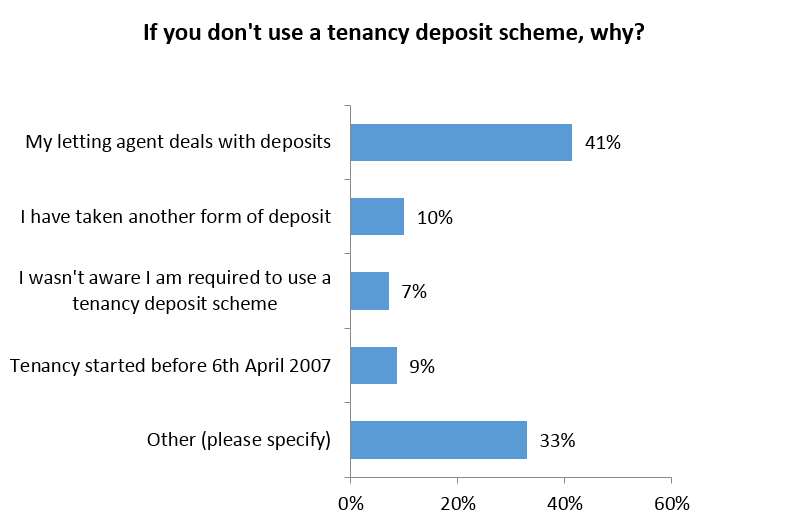 This shows that an overwhelming majority of landlords are conscientious and actively keep up to date with the current legislation.

5) Have you ever withheld a tenant’s deposit? 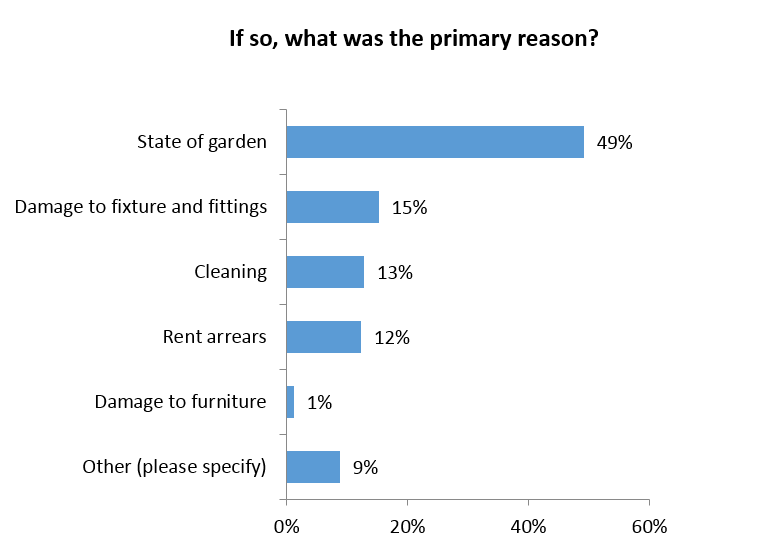 6) Would you ever consider a tenant with pets? 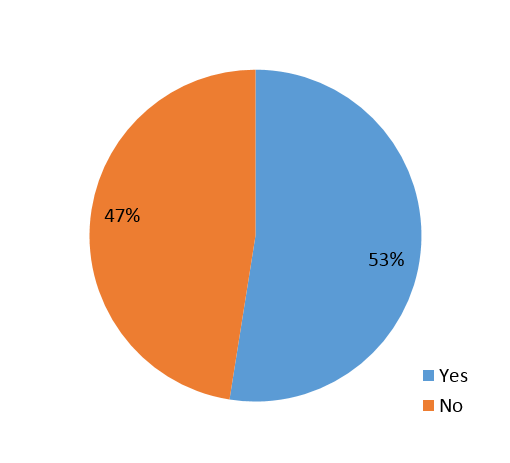 7) How many rental properties do you own?

Over half of landlords who answered our survey (55%) only own one rental property. 36% own 2-3 properties, and only 1% own 10+ properties. This shows us that the majority of landlords actually own only one or 2 properties, showing us that not many landlords own a vast portfolio of properties. 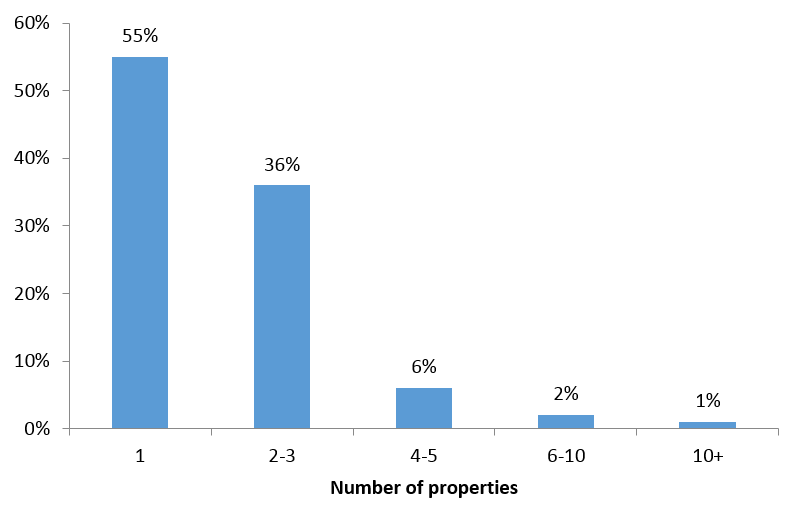 8) Do you use a letting agent? 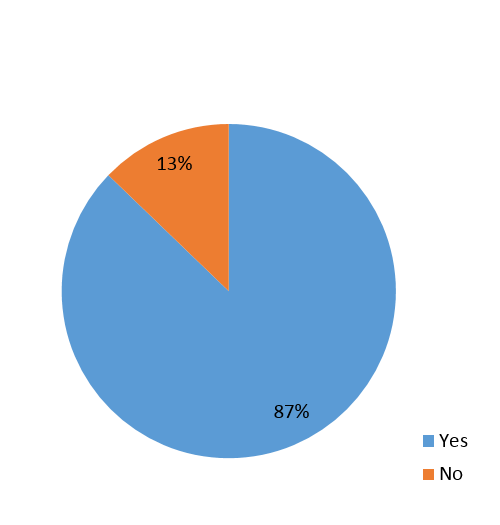 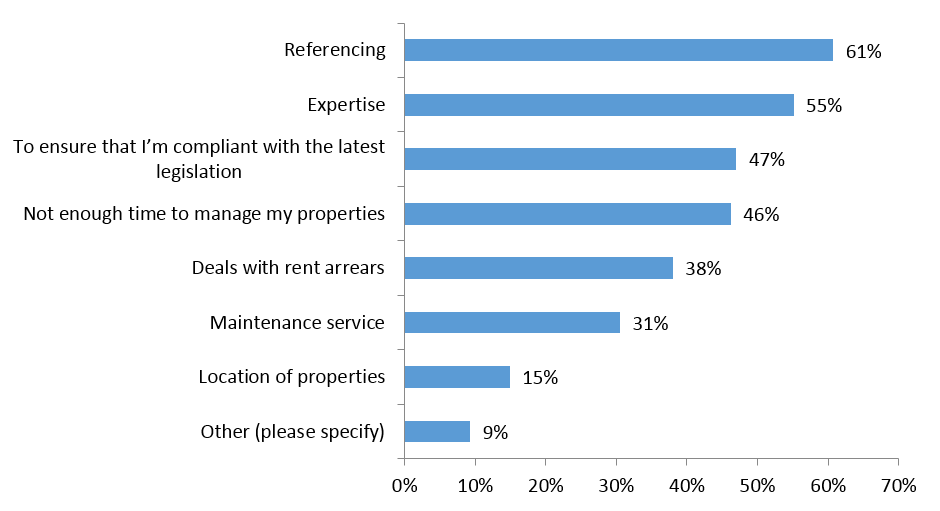 9) What is your primary reason for not using a letting agent?

Of the landlords who responded stating that they don’t use a letting agent, 43% said that their primary reason for this was cost. A further 34% said their primary reason was that they wanted to meet and be the main point of contact for their tenants, while 30% stated they enjoyed managing the properties themselves. 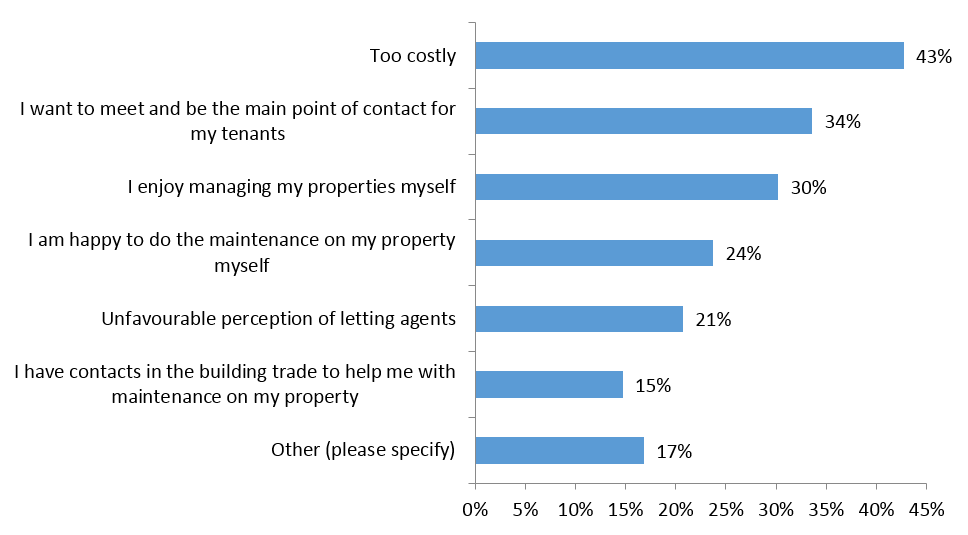 10) How easy do you find it to fill your properties when they’re vacant?

11) How often do you correspond with the tenant?

12) Do you have a mortgage on your rented properties?

Of the landlords surveyed, there was a fairly even split between those who had a mortgage on their rented property and those who owned the property without a mortgage. It’s likely that this is influenced by how the person became a landlord… 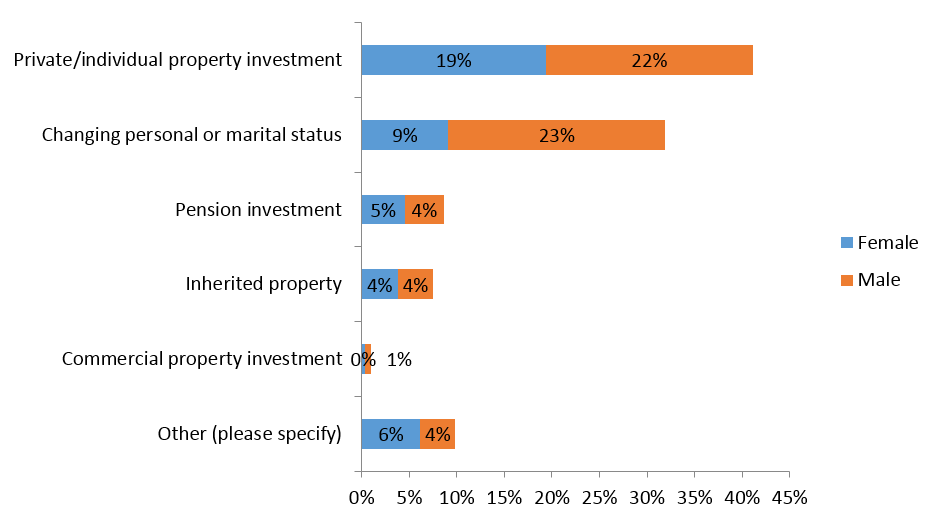 13) How did you become a landlord?

There was an even split between respondents of either gender about how they became landlords. Although interestingly, 23% of men became landlords due to a change in personal or marital status in contrast with only 9% of women.

When the respondents are split via age group, it becomes clear that many younger landlords became landlords due to a change in personal or marital status, whereas people in older age groups did so either as a pension investment or because they inherited property. Either private or individual property investment as a motivating factor was evenly split among all age groups.

14) Do you plan on increasing the rental amount on any of your rented properties?

Our survey also showed that 57% of landlords plan to increase the rent on their properties in the near future, with 34% confirming they plan to do so within the next 12 months and a further 9% telling us that they will in the next 6 months. 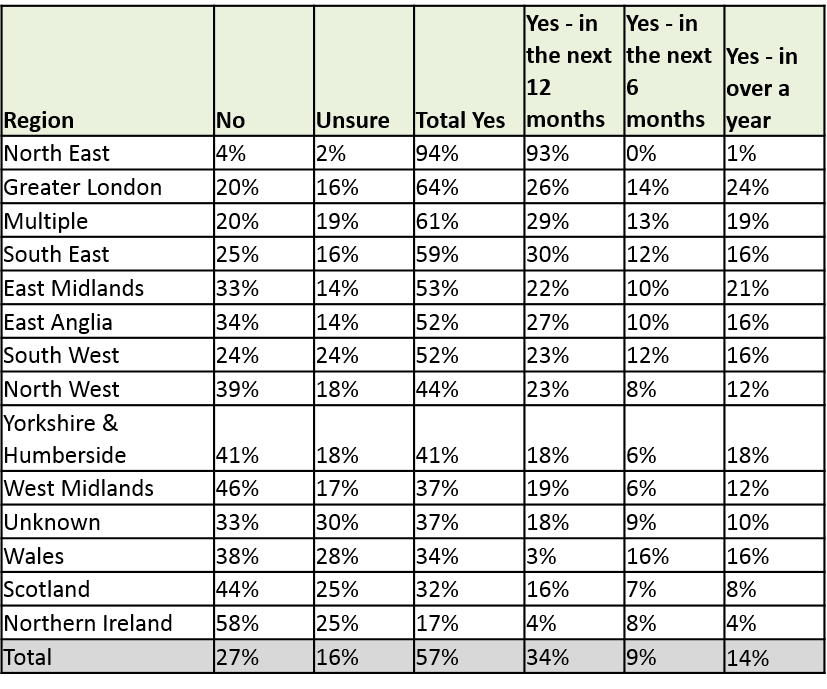 Of landlords planning to increase the rent, 26% stated that their primary motivation for doing so was an increase in letting agent fees. 17% were doing it in order to fund renovations to the property, and only 19% said that their primary motivation for increasing the rent was to increase profit. Of the 26% who replied ‘other’, many stated that it was to keep up with inflation and market forces.

15) How long do you intend on being a landlord?

16) What’s the worst or most stressful part of being a landlord?

In terms of responses offered, the most popular reply from landlords about the most stressful or worst part of the job was the high turnover of tenants, with 18% finding it stressful. Interestingly, only 3% thought that it was too time consuming.

Of those who specified ‘other’, many stated that they did not find it stressful.

To conclude, our survey’s found that the vast majority of landlords are planning on staying as a landlord for the long term, with 96% happy with their tenants and keeping in regular contact with them. For more insights into the private rented sector, and to make sure you’re up to date with the latest news, make sure you’re subscribed to the Landlord Lowdown newsletter and follow us on Twitter and Facebook.