Since March 2020 and the start of the first nationwide lockdown, many of us have got used to working from home full-time.

Despite lockdowns ending, many people have found that they work better from home, it suits their life better, or they have just simply gotten used to the lifestyle. Whatever the reason, plenty of people across the country are opting to remain working from home.

Because of this, good work from home space has taken on a whole new importance for tenants. Before, it was maybe an afterthought or a nice-to-have, but now it is increasingly being seen as an absolute necessity for a lot of people.

Here, we explore the best work-from-home destinations for tenants – those places which offer the dream combo of fast broadband, affordable rents, nearby green space (for the all-important switch off from work-life) and comfortable home-working facilities.

It may not seem like an obvious choice, with its high population density, traffic and perceived unfriendly nature, but the capital is still a hotbed for tenants – whether they be students, young professionals house-sharing, or older tenants who prefer the flexibility and freedom provided through renting a property.

Despite so much of what makes London great for tenants being closed at present – theatres, cinemas, clubs, bars, restaurants, museums, etc. – it remains a good place to work from home because of the generally fast broadband speeds, the huge supply of different rental homes and the proximity to a wide range of green space and outdoor leisure facilities.

What’s more, for those seeking takeaway cups of coffee to boost them early in the day, or a cheeky weekend takeaway, London has everything you could need on its doorstep in a way the countryside or smaller cities, towns and villages can’t offer. Uber Eats, Deliveroo, Just Eat – all are on hand to give people a takeaway treat every now and then.

Also, from a more practical point of view, issues with broadband in London – which happen from time to time – tend to get fixed fairly rapidly because of the number of people affected by outages (and the subsequent complaints these lead to), while there are many computer repair shops nearby if any issues occur with laptops, phones or tablets.

The downside of renting in London, typically, is the much higher rents at play, which makes sharing or renting with another person a must.

Another major city, but smaller in size than London – and definitely more affordable – Manchester has become something of a renting hub in recent years, as the city continues its transformation from post-industrial decline to thriving, cool and popular. 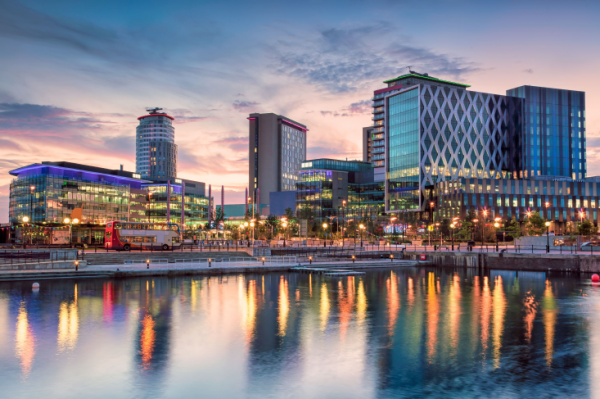 Outside of London, the biggest concentration of Build to Rent homes is found in Manchester and nearby Salford, home to MediaCityUK and the Lowry. These developments very often prioritise remote working facilities and fast broadband speeds, included in inclusive packages. Equally, they have an emphasis on communal events to enable people to make friends and switch off from their work life.

As a big, important city, Manchester offers similar levels of fast broadband and takeaway options. It has much less obvious green space, but you don’t need to go far from the city to find some – and of course the Peak District is fairly close by for long-distance trips.

Manchester is also home to a lively start-up and tech scene – as well as the media opportunities on offer in the city and nearby Salford. Most of these jobs lend themselves well to working from home, with companies that encourage, support and facilitate it. If you are looking for a city where WFH opportunities are plentiful, Manchester might be the one for you.

At the complete other end of the spectrum, there will be some tenants who are now seeking seclusion and tranquillity in the countryside. One of the biggest trends of the pandemic was a move from cities to smaller towns, suburbs and country locations.

A recent study by Small Business Prices revealed the ultimate secluded areas to work remotely in the UK, with people taking the opportunity to live in the countryside on a city wage as a result of the boom in home-working.

The study examined each location according to metrics such as the monthly cost of rent, broadband speed, distance to the nearest airport and the number of cafes with WiFi, as well as the number of green spaces and closeness to the sea, and found that Lymm – a village and civil parish in the borough of Warrington and the county of Cheshire - ranking highest overall across all metrics.

With a population of just over 12,000 and tonnes of green space nearby, the area may be appealing to those seeking an escape from the hustle and bustle of city life.

It also sits smack bang in the middle of Liverpool and Manchester, which makes it an ideal location for those who still need to visit the city from time to time.

The best of the rest

The research also found that Penzance in Cornwall is, unsurprisingly, best for those remote workers looking for a sea connection, as it’s located just 0.5 miles from the ocean. Hawes in Yorkshire, meanwhile, is best for those prioritising cheap rent, with an average rental value of just £400pcm (as of when the study was conducted).

Elsewhere, Tewkesbury, a historic market town in Gloucestershire, boasts the most WiFi spots (581) for those who like to check emails or take Zoom/Teams calls on the move, on their tablets or mobiles.

Famed for its fish and chips and connections to Bram Stoker’s classic novel Dracula, the seaside town situated on the east coast of Yorkshire has long been a source of fascination for visitors. But it may also be a great place for remote working, with average rents of around £700 per month, a beach and cliff-top walks for escapism, a more relaxed pace of life and history wherever you look.

You’ll have to get used to the bracing North Sea air during the winter months – and often outside of this! – But if you’re looking for somewhere with atmosphere, character, intrigue and a Gothic vibe, Whitby represents a fantastic choice. 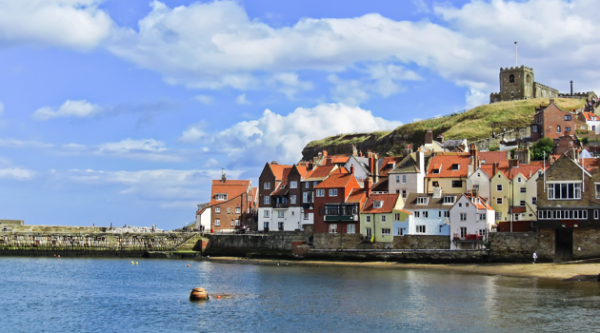 It’s certainly secluded, but Scarborough and Middlesbrough are relatively nearby, and major cities like York, Leeds and Newcastle all sit a little further afield, but Whitby and its surrounding areas has everything you will need for a comfortable existence. It’s also well-served by various railway lines, if you need to go elsewhere.

If you’re looking for something completely different, and a bit off the beaten track, Whitby might be right for you. Out of season, rental homes should be cheaper, too. In normal times, it has a number of cafes with WiFi, if you were looking for a change of scenery from your home office.

Sticking with Yorkshire, this spa town on the outskirts of the Yorkshire Dales and close to Leeds, Bradford and York, recently topped an index carried out by Uswitch outlining the best places to work from home.

Praised for its plentiful green space, highly rated schools and fast broadband speeds, Harrogate sits close by to the medieval city of Nidderdale, a designated Area of Outstanding Natural Beauty, and enjoys huge swathes of surrounding countryside in all directions. It offers the perfect balance between country and town living, providing the best of both worlds to residents.

The other cities and towns in Uswitch’s top 5 included Bath and Mendip, both in Somerset, Derry in Northern Ireland and Wigan in Greater Manchester.

By contrast, the price comparison site rated Ipswich in Suffolk, Sandwell in the West Midlands, Blackpool in Lancashire and Leicester as some of the least desirable locations for home workers.

The above are just some of the many places that you could consider, but each person will have different wants and needs and these should be factored in when making your decision.

If you're a renter who's considering moving home, make sure your possessions are protected.