Whether you’re looking for a flat-share with a friend or a house for the whole family, there is a lot to consider when finding the perfect place to call home. Factoring in everything from commuting distances to work and the ease of the school run, to having plenty of green space and being near to a city centre can take time, as well as many viewings. The longer the tick list, the more in-depth the search can be.

Here at HomeLet, we wanted to find out what it is that helps us make our final decision about where we live. We asked 1,488 UK rental tenants what they’re looking for when they’re searching for somewhere to live and looked at average rental data from the HomeLet Rental Index to get an idea of what we’re doing when we hunt for a new home. 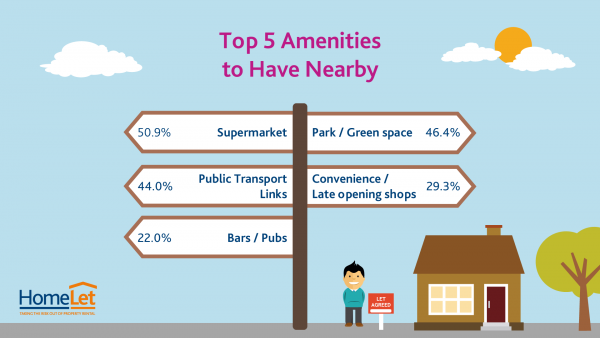 Having easy access to groceries and other household essentials tops the list of amenities and features we want near our home. Over half (51%) of Brits are looking for properties that are near to a supermarket, while, conversely, just 29% think being close to shops that open late is important.

The need for nearby parks also scored highly, with 46% wanting green spaces in the locality, and 44% are searching for somewhere that has good links to public transport. Half of the women we asked think green space is the most desirable aspect of a property. In fact, over a quarter (28%) would pay more on rent if it meant easier access to parks. 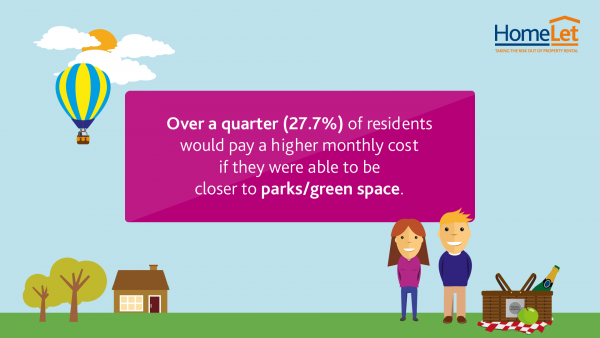 Interestingly, the popularity of being close to pubs and bars saw an average of 22% stating that this is an important factor during a property search. We found that men are marginally more likely to be looking for bars and pubs than women, with 25% placing this as a top priority, compared with 20% of women.

Overall, we found that when we looked at the rental index and the other survey results, men are happy to pay more for living closer to desirable conveniences. Meanwhile, residents in Leeds are most likely to have their heads turned by properties that are near to supermarkets, parks and other aspects.

When it comes to the age of the property hunters, the most discerning of the bunch are those aged between 35 and 44. These were the group who selected the highest number of must-have services and amenities, plus they are most likely to pay more for the privilege of having high-quality services, shops and other amenities on the doorstep. 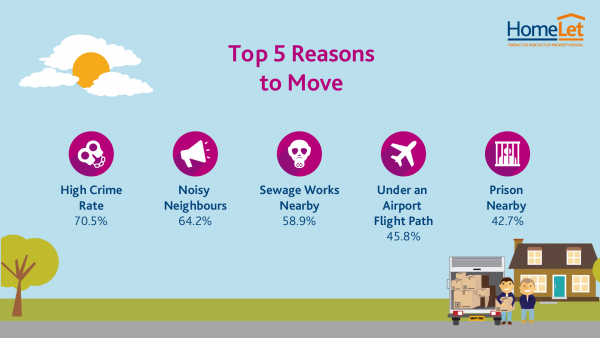 Based on our survey results, almost three-quarters (71%) are put off by areas with a high crime rate. This means that even the savviest of house hunters who are hoping to save on rent and other household payments are drawing the line at crime hotspots. Having contents insurance and tenants liability insurance when you’re renting can go a long way to giving both tenants and landlords peace of mind, however, so it’s worth keeping this in mind during a property search.

Noisy neighbours were also a big turn off for potential tenants, with 64% stating this would stop them from signing up for a flat or house rental. This also scored highly in the list of reasons to move. This was followed by being close to sewage works (59%), being under an airport’s flight path (46%), and proximity to a prison (43%).

When it comes to negative points, women are more easily put off than men. In contrast, younger people in the 18-to-24 age group were generally unfazed by off-putting factors.

While there are undesirable aspects to plenty of properties, there are potential savings to be had by opting to rent in one of these property types. Although some things may be non-negotiable, by making compromises, you may be able to save in the long run.

We looked at what we’d be willing to overlook in order to save money and found that most Brits aren’t that superstitious, with 41% of us feeling comfortable with living at number 13. We’re not that spooked, either, as 41% are also happy to live with a graveyard close by.

Rude street names don’t bother 39% of us, having a motorway close by is fine for over a quarter (28%), and being close to a phone tower is no problem for 26% of tenants in the UK. 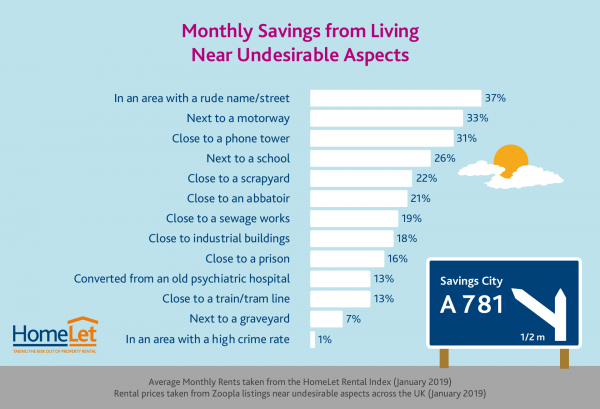 To really see the savings increase, we found that your monthly outgoings could be significantly reduced when residing on a rudely named street (37% saving); moving next to a motorway (33% saving); and putting down roots nearby a telecommunications tower (31% saving); You could potentially only save 13% by being next to a train track; 7% by setting up home next to a graveyard; and 1% when moving to an area with a high crime rate..

With these stats in mind, it may be time to overlook the naughty street names and noisy motorway traffic if it means you can start saving up!