The latest HomeLet Rental Index has revealed that Wales was the only region in the UK to witness a fall in both the monthly average rental rate for new tenancies, and the annual rental when compared with the same period last year.

Interestingly, if we take a look at January’s Rental Index and December’s, Wales also saw falls in both variances: 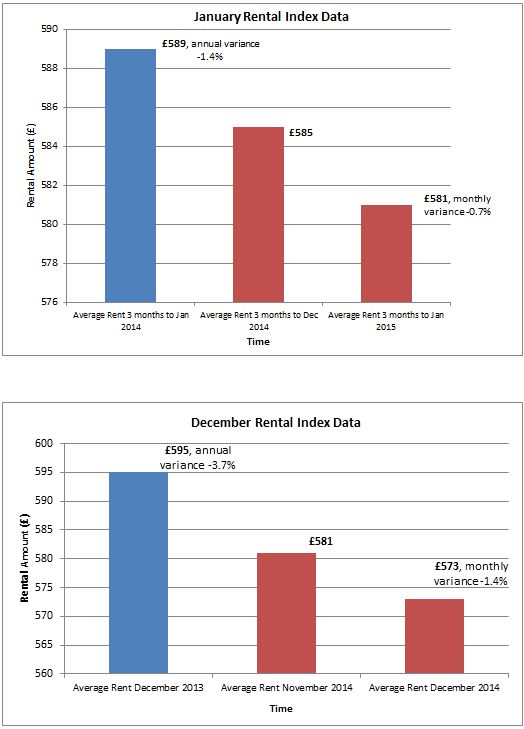 So what could be causing such a trend to occur?

For some analysts, the type of properties available to tenants and landlords is causing problems. In an article from WalesOnline, back in October 2014 when Wales’ rental rates were reported to be ‘lagging behind the rest of Britain’, the Welsh representative for the Association of Residential Letting Agents, and managing director of ACJ Toby Jones, was quoted as saying:

‘We have noticed a trend for landlords buying smaller properties, due to their profit-making potential. Properties worth a lower value generally seem to yield more money for landlords and are in higher demand by tenants... There are fewer high-end properties in Wales as they give a lower return on investment for landlords and there just isn’t the same level of demand for them.’

This suggests that the statistics are a reflection of the more affordable types of property being let, and that the current figures could be a result of this lack of demand for higher end properties obscuring the overall numbers.

Another potential contributing factor could be down to cheaper living costs bringing rental costs down. As according to the Welsh Government’s official website, Wales can currently boast some of the lowest living costs in the UK.

A great deal to offer tenants

Naturally, this decrease in Wales’ rental rates is positive news for prospective tenants looking in this region. Moreover, with the cheaper cost of living and the wide range of choice in living areas, Wales has a lot to offer tenants.

Major cities like Swansea and Newport offer a number of cultural features and job opportunities. The country’s capital city Cardiff is renowned for its appeal for younger demographics and is regularly featured in lists of the best cities to live. Also, Northern and coastal areas of the country are home to several national parks and rural towns and villages, which can cater for those looking for quieter homes.

With all this in mind, what will be interesting to note is whether or not Wales’ trend in falling variances continues in the coming months.

All figures from HomeLet’s Rental Index, correct as of 17/03/2015
Image courtesy of Shutterstock.