The latest findings from the HomeLet Rental Index reveal that over the three months to October the cost of a tenancy outside of London rose by 3.5 per cent when compared to last year. Whilst this level of growth for new tenancies continues to outstrip the rate of inflation, this is much lower than the peaks seen just a few months ago when rents were up by over 8%.

The latest HomeLet Rental Index is published alongside new research* into tenants’ views about the rental market, conducted by HomeLet in October 2015. The research reveals that a large proportion of tenants are renting their homes for the long term and that they value relationships of trust with landlords and letting agents. In HomeLet’s nationwide survey of almost 15,000 tenants, almost two-thirds (64 per cent) said they planned to continue renting for a year or longer, and 90 per cent said they were happy with their landlord.

HomeLet’s survey found that a large proportion of tenants (71 per cent) would ideally prefer to buy a home, however 66 per cent said they saw saving for a deposit as the biggest barrier preventing them from doing so.

The slowing pace of rent rises recorded by October’s HomeLet Rental Index may be welcomed by those planning to sign new tenancies in the months ahead, though HomeLet’s survey also reveals a broad range of factors are important to tenants when choosing a property. While 87 per cent of tenants indicated rental cost is an important factor, both attractiveness of the surrounding area (75 per cent) and a low crime rate (70 per cent) also ranked highly.

October’s HomeLet Rental Index shows that the gap between the pace of annual rent rises in the capital (7.5%) and the rest of the UK (3.5%) has widened in recent months, after converging over the summer. On average London tenants paid £1,560pcm, which is over £800 more per month that the rest of the UK.

For the second month running, the HomeLet Rental Index reveals that rents are now rising most quickly in Scotland, where new tenancies over the three months to October 2015 cost 9.0 per cent more than in the same period of 2014.

While the pace of rent rises has slowed over the autumn, rent inflation has increased in nine out of 12 regions of the country – the exceptions are the North West, where rents on new tenancies over the three months to October were 4.9 per cent down on last year, Northern Ireland (2.1 per cent down) and East Anglia (1.2 per cent down).

Greater London rents versus the rest of the UK, October 2015 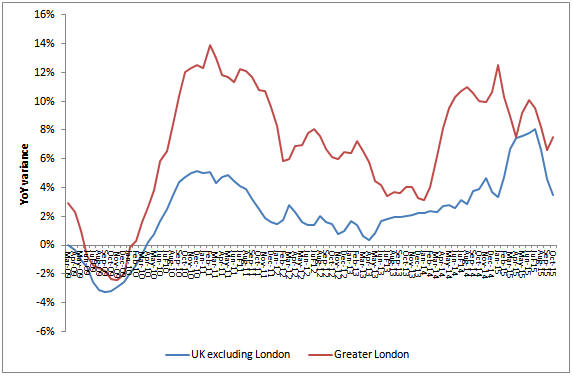 “Our survey showed that many tenants ultimately aspire to own their own home, but that just over half of them aren’t actively saving for a deposit yet. 66% of those questioned said that a deposit wasn’t affordable for them.

“Whilst we are seeing upward pressure on the rental market it’s important that the sector continues to drive professional standards forwards for mutual benefit of tenants, landlords and letting agents.” 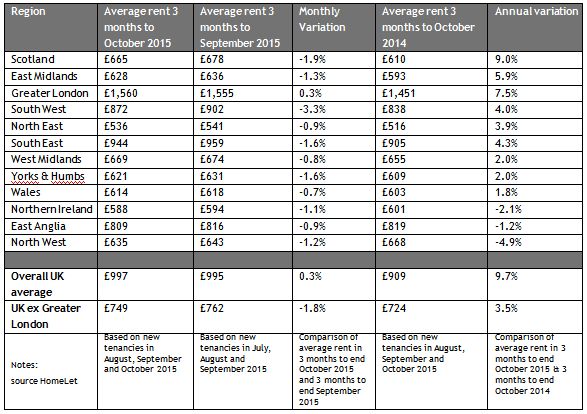 About HomeLet’s survey of tenants:
HomeLet surveyed 14,464 tenants across the UK in October 2015. For the full results please visit: http://homelet.co.uk/homelet-rental-index/tenant-satisfaction-survey-Oct-2015

In October 2015, HomeLet’s Service Centre in Lincoln was ranked 13th in the UK Top 50 Companies for Customer Service.

HomeLet’s Landlord Insurance has been awarded five out of five stars by independent financial product research company Defaqto, (1 February 2015), defaqto.com. Five star products provide the highest level of cover with a comprehensive range of features and benefits, and must meet additional minimum criteria in certain areas.

About the HomeLet Rental Index
As well as information on rental amounts, the HomeLet Rental Index also provides information on tenant demographics, such as their average age, income, previous residential status and property type they’re applying to live in. In addition, data is gathered on how many people share a rented property –to get a real feel for the lifestyle of tenants and see how external factors, such as the lack of mortgages and increase in unemployment, are affecting how and where people live.

Data is gathered from HomeLet’s tenant referencing service, and rental amounts are based on actual achieved rent prices with accurate tenancy start dates in a reported month, rather than advertised costs. Up to 1,700 applicants are referenced every day, so information in the report is extremely comprehensive, accurate and up to date.

If you would like to receive the full report, please email marketing@homelet.co.uk