New findings from the HomeLet Rental Index show that rent prices continue to rise across the UK, with many diverse regions now keeping pace with or exceeding the pace of price increases seen in London. The Index reveals that the average rent on new tenancies agreed in the three months to July 2015 across the UK was £977 a month, (£761 a month excluding Greater London). The average UK rent price was 11.8 per cent higher than in the same period of 2014.

The Index, which provides the most up-to-date figures on UK rent prices, shows that rent price growth in the private rental sector is now extremely broad-based with all regions, bar the North West of England, registering an increase in rents on an annualised basis over the three months to July 2015.

In London where, in cash terms, the average rent on new tenancies is more than twice as high as in the rest of the country, prices continue to rise. New tenancies signed over the three months to July came with rents that were 9.5 per cent higher than in the same period of last year.

Commenting on the report, Martin Totty, Chief Executive Officer, Barbon Insurance Group, parent company of HomeLet, said: “The July HomeLet Rental Index demonstrates just how broad-based the rise in rent prices has now become – this is a UK wide trend. Regions which have long been associated with a buoyant rentals sector, such as London, continue to experience rising prices, but rents are also rising in many other parts of the country at similar rates.

“The South-West of England, for example, is benefitting from its popularity with those attracted to the area for lifestyle reasons, as well as the strong local economy in many of the towns and cities of the region.” 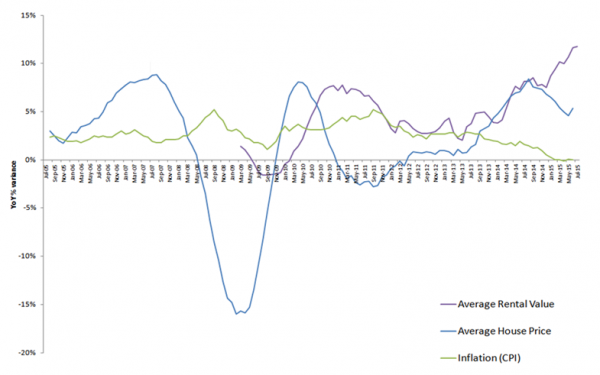 Martin Totty added: “Over the past few years, price trends in the rental market and house purchase market have been very similar. However, across the first half of this year, house price growth has slowed whilst rental values have continued to increase, perhaps reflecting a change in the relative attractiveness of renting versus buying over this recent period.

“With early signs of the cost of mortgage finance starting to edge up, it will be interesting to see if this recent trend continues or if the change in buy to let mortgage interest tax relief announced in the Summer Budget has any indirect impact on rental values with some suggesting it could further stimulate rental values over time if supply of rental properties is constrained as a consequence.” 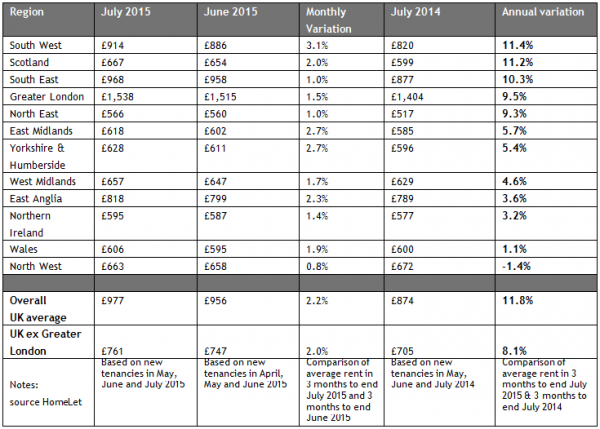