Fears that higher Stamp Duty charges on buy-to-let rental property purchases might destabilise the market have so far proved unfounded according to the April HomeLet Rental Index, which provides the first comprehensive data published on the UK’s private rental market since the new tax rates came into force on 6 April. HomeLet’s figures show that rents agreed on new tenancies across the UK over the three months to the end of April have continued to grow at remarkably consistent rate.

The April HomeLet Rental Index reveals that rents on new tenancies signed on a UK rental property outside of London over the three months to April 2016 were, on average, 5.1% higher than in the same period of last year. That was barely changed from March’s figure of 4.9%, with rent rises having remained in a very narrow band since the beginning of the year.

In the capital, meanwhile, rents on new tenancies signed over the three months to the end of April were 7.7% higher than a year ago, the third successive month that London has registered this rate of increase.

The eagerly-awaited April HomeLet Rental Index is significant because it comes just a few weeks after the Government introduced a 3 percentage point Stamp Duty surcharge on all purchases of residential property purchases made by someone not buying their main home. Data from groups such as the Council of Mortgage Lenders suggests there was a spike in property transactions during March, as buyers such as buy-to-let landlords rushed to beat the Stamp Duty increase, prompting speculation that there might be a sudden increase in the supply of rental property, leading to more subdued increases in rents. So far, however, HomeLet’s figures suggest rents have been unaffected by the Stamp Duty increase – though it will be important to monitor the Rental Index in the coming months.

The latest figures show that rents in Scotland are currently rising faster than anywhere else in the UK, with new tenancies costing 11.4% more than in the same period a year ago. However, the East Midlands, registering a rise of 7.9% in rents compared to last year, is hot on Scotland’s heels – the area, currently revelling in the success of Premier League football champions Leicester City, also tops the table of English regions by rental inflation.

London’s rental market, where the average rent on a new tenancy is now £1,543, also continues to see rents rise more quickly than in most other areas of the country. The 2.6 percentage point gap between rent rises on new tenancies in London and the rest of the UK, where rents average £764, is barely changed on last month (2.8 percentage points).

Commenting on the report, Martin Totty, Barbon* Insurance Group’s Chief Executive Officer, said:  “The April HomeLet Rental Index has been much anticipated given the potential impact of the Stamp Duty changes on the private rental market; for now, however, rental price growth in most areas of the country is unchanged from the trends observed over almost three years.

“It may be that over the next several months, the trends observed in the rental market begin to reflect the signs of some slowdown in the rate of house price growth that we are now beginning to see and that will be something to watch closely. But more broadly, there has been very little to alter the fundamental relationship between demand and supply, especially in those parts of the country where demand-side pressure is greatest.

“For now it’s business as usual, which may be better news for landlords than for tenants, though landlords will no doubt be feeling the squeeze too given the various taxation changes they now need to budget for. We will have to see whether landlords try to pass their higher costs on, whether buy-to-let property investment diminishes in popularity and whether tenants are able to afford further increases in rents.

“These questions continue to exercise the minds of market analysts and opinions are divided: the HomeLet Rental Index will provide crucial monthly intelligence on how landlords and tenants are responding as the year progresses.

“Nevertheless, the sector will continue to be characterised by regional variations. Take, for example, the sharp increase registered in rents in the East Midlands in recent months – it will be fascinating to see whether what you might call the ‘Jamie Vardy effect’ is a flash in the pan or something more than a one-season wonder.” 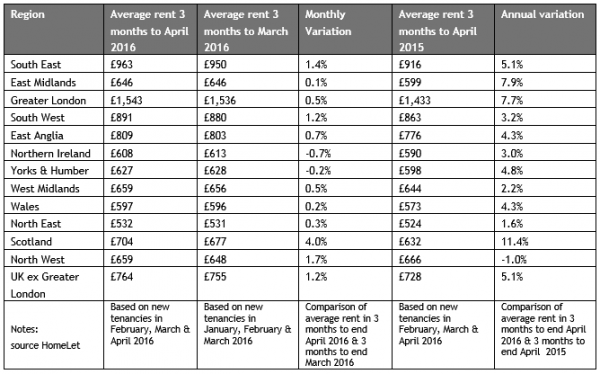 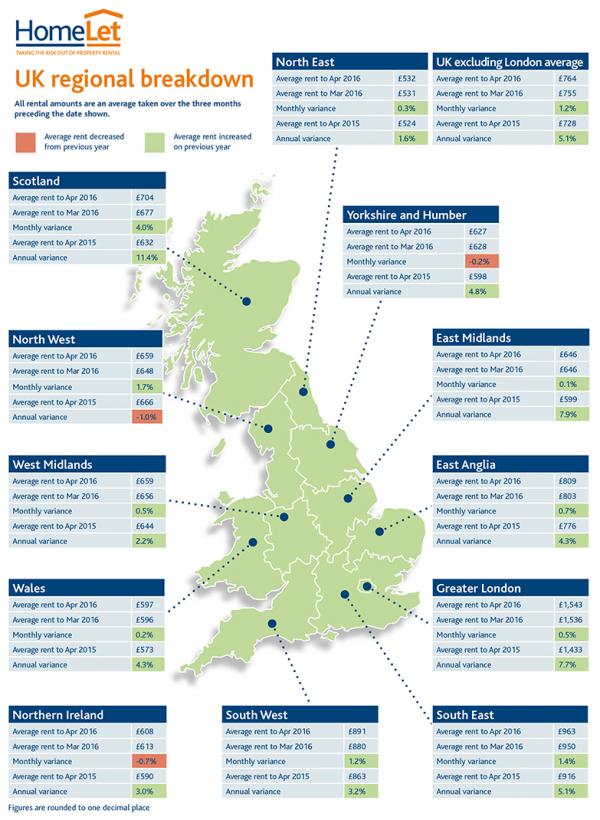 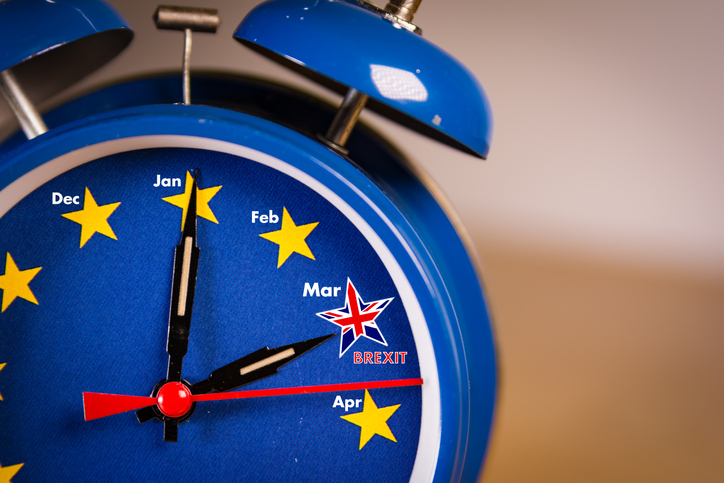