The latest figures from the HomeLet Rental Index reveal that rents on new tenancies signed on a UK rental property outside of London over the three months to March 2016 were, on average, 4.9% higher than in the same period of last year. In the capital, meanwhile, those signing up to new tenancies in the private rental market agreed to pay an average rent that was 7.7% higher than a year ago.

HomeLet’s research shows that rents continue to rise significantly ahead of inflation, with demand for property remaining strong. However, the March data comes ahead of reforms that are predicted to have a major impact within the sector, including a stamp duty increase for landlords buying new properties to let and new rules from regulators on buy-to-let lending.

HomeLet’s own data already shows evidence of landlords taking action ahead of the stamp duty changes. In March the specialist provider of Landlord Insurance saw a marked increase in enquiries from property investors, with 37% of insurance policies being purchased by landlords with new properties compared to just 24 per cent in the same period last year. This fits with recent data from the Council of Mortgage Lenders showing a spike in buy-to-let lending ahead of the stamp duty increase.

London’s rental market, where the average rent on a new tenancy is now £1,536, continues to see rents rise more quickly than in other areas of the country. At 2.8 percentage points, the gap between rent rises on new tenancies in London and the rest of the UK, where rents average £755, was almost identical to last month (2.9 percentage points). Just one area of the country, the North West of England, saw lower rents on new tenancies over the three months to March, with the HomeLet Rental Index recording a fall of 3.5% over the year.

Commenting on the report, Martin Totty, Barbon* Insurance Group’s Chief Executive Officer, said: “We’ve continued to see increases in rents on new tenancies in almost every part of the UK during the first quarter, as the private rental market has responded to the pressures of an imbalance between demand and supply.

“However, external factors may now come into play: the stamp duty increase has already had an impact and that surge in the acquisition of property by landlords could now cause a short-term increase in the supply of rental property in some areas of the country. In the longer term, changes to rules around buy-to-let mortgage interest being offset against tax bills, coupled with the Bank of England’s instruction to lenders to apply more exacting criteria on buy-to-let lending, may have a limiting effect on supply. The data from the HomeLet Rental Index will be eagerly anticipated over the next few months as an indicator of the impact these changes have may have on the market.

“However, despite these factors, we expect the private rental sector to continue to play a crucial role in a housing market where population growth will continue for the foreseeable future according to official projections.” 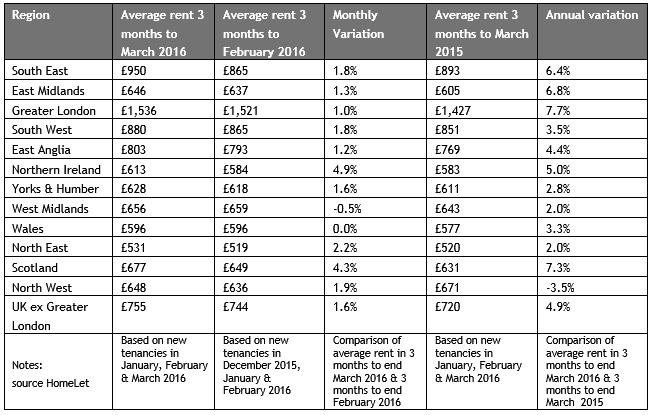