The latest figures from the HomeLet Rental Index reveal that rents on new tenancies agreed over the three months to November fell in most areas of the country, while a new report from HomeLet suggests that nine in 10 landlords do not intend to raise rents on their existing tenancies during the first six months of 2016.

November’s Homelet Rental Index is published alongside comprehensive new research* into landlords’ views about the rental market and their expectations for the year ahead. The research reveals that 91 per cent of landlords do not plan to increase the amount of rent they charge on their properties in the next six months. Even looking further ahead, only 34 per cent of landlords plan to increase rents over the next 12 months.

Commenting on the research, Martin Totty, Barbon* Insurance Group’s Chief Executive Officer, said: “The research reveals the vast majority of landlords enjoy strong relationships with their tenants and are keen to keep them. Just 4 per cent said they were unhappy with their current tenants, while 18 per cent said high tenant turnover was the most stressful part of being a landlord, more than cited on any other single issue.”

Totty was not surprised by these figures. “Being a landlord is a long term investment and attrition of tenants is not something landlords desire; our own clients tell us they would rather retain a good tenant over the longer period than seek additional income,” he said.

On average across the UK (excluding London), rents on new tenancies are 3.8 per cent higher today than they were a year ago, at £743 a month compared to £716 a month in November 2014.

Greater London has seen even higher increases. The latest average monthly rent on a new tenancy in the capital, at £1,544 a month, is 7.5 per cent higher than a year ago, when rents were averaging £1,436. The East Midlands, which has seen increases of 6.2 per cent over the past year, follows closely behind London, while rents in both Scotland and the South-East of England are up 6 per cent.

However, the annual growth in rental values in the capital slowed from a peak of over 12% in January to 6% in September. In contrast, the rest of the UK saw a marked increase in average rents throughout the spring and summer months.

Martin Totty, Barbon* Insurance Group’s Chief Executive Officer, commenting on the past year, said: "We saw rents rise particularly quickly during the first half of the year, before the pace of acceleration slowed in most parts of the country over the autumn. The HomeLet Rental Index showed continuous growth in London on a month to month basis in 2015 with the exception of a slight drop in September and November, ending the year with rents in the capital now 108 per cent higher than the rest of the UK.”

Rent movements: Greater London vs rest of the UK November 2015 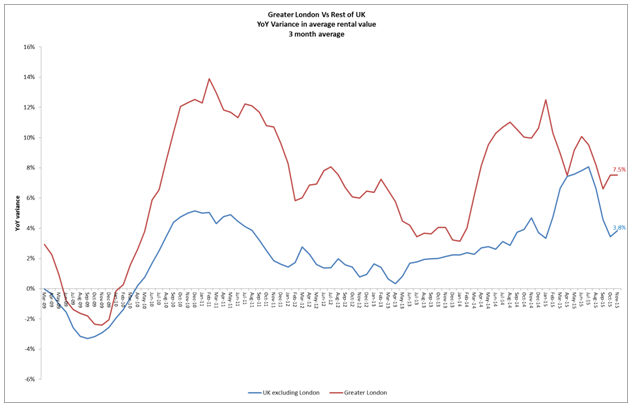