Rents across the UK continued to rise during June, but the first half of 2016 has been characterised by a slowing in the pace of rental increases, new data from the June HomeLet Rental Index reveals. The index, the most comprehensive data available on the UK’s private rental market, shows that rents agreed on new tenancies across the UK (excluding London) over the three months to the end of June were up by 3.5 per cent, compared to the same period in 2015. In the capital, meanwhile, rents were 3.9 per cent higher.

By contrast, the UK-wide figure for May was 4.4 per cent (6.2 per cent in London). The more modest rental increases seen in June are a continuation of a trend that has developed throughout the first half of the year, with rents rising across much of the UK each month, but at a slower pace than was the case throughout most of 2015; last June, rents were rising at an annual rate of 7.8 per cent (10.1 per cent in London).

The data suggests the private rental sector has responded to the needs and concerns of landlords and tenants alike during the first half of the year. Landlords were hit by higher stamp duty charges on purchases of new property in April, which led to a rush to complete transactions before then – and a spike in the supply of rental property thereafter.

Meanwhile, tenant demand for property has remained strong, particularly given rising house prices and squeezed mortgage availability, and projected growth in the UK’s population suggests this will continue; official projections suggesting this growth will come from both the British-born population and net migration. Nevertheless, the slowing in the pace of rental increases may reflect landlords’ recognition that an affordability ceiling is approaching.

The outlook for the sector will depend in part on the fall-out from the UK’s decision to leave the European Union in June’s referendum. Some economists expect the referendum result to act as a brake on construction in the housing sector, which could exacerbate the current imbalance between demand and supply in the rental market. It is also possible that demand may increase as would-be house buyers opt to wait and see how house prices are affected over the next 12 months and beyond.

HomeLet’s data also suggests that the average length of a tenancy – as measured by how long tenants had occupied their previous rental property – has begun to come down over the past three months. The figures underline the important role that the private rental sector plays in providing a wide range of housing options to those who have not purchased a property.

The June 2016 HomeLet Rental Index reveals that rents continue to rise in almost every area of the country, with 10 out of the 12 regions surveyed seeing an increase over the three months to the end of May.

Commenting on the report, Martin Totty, Barbon* Insurance Group’s Chief Executive Officer, said:
“The June HomeLet Rental Index shows that the rental market remains resilient in the face of the various economic and political headwinds the sector has faced recently. Landlords are continuing to secure rental growth whilst there are some early signs of affordability criteria beginning to bear on the rates of rental price growth”

“The impact of the EU referendum vote will now play out over the months ahead: if, as expected, the result acts as a restraint on the supply of new housing, the gap between demand and supply in the private rental sector will remain marked; all the more so if more people decide to rent while waiting to see what happens to house prices.

“Landlords will be considering their position carefully, particularly in the light of further taxation changes to come next year, which could reduce net yields; with long-term drivers such as net population growth still in place, it is likely that rents will continue to rise, though affordability will continue to be crucial. The recent slowdown in rental growth rates may suggest an affordability ceiling is being approached.” 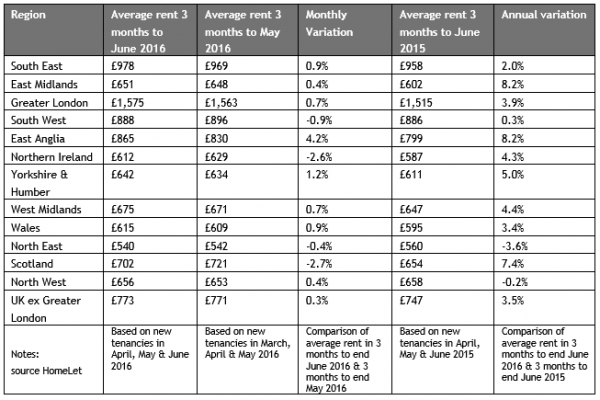 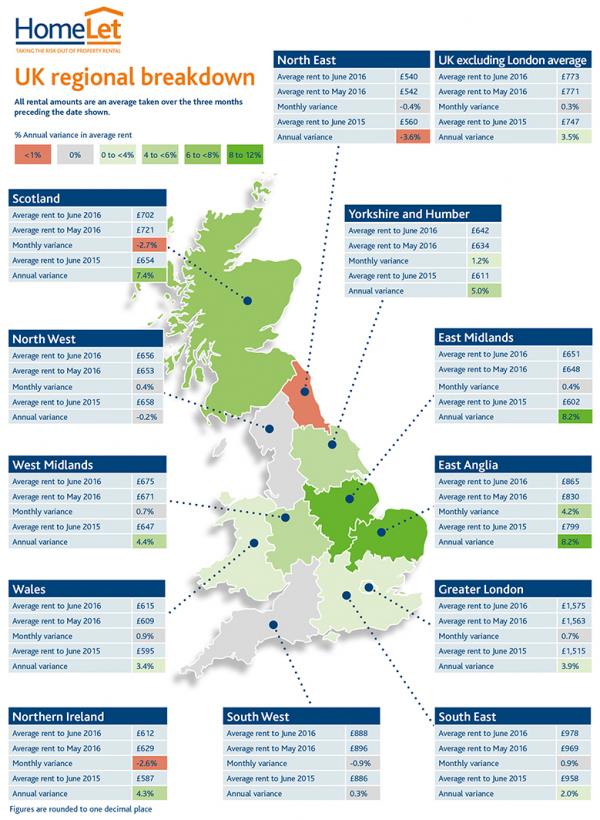