After six months of annual rent price rises of 10 per cent or higher, the latest findings from the HomeLet Rental Index have shown rent prices have slowed below double figures to an average annual increase of 8.5 per cent across the UK. For the three months to September 2015, every region of the UK with the exception of the East Midlands has seen annual rent price rises slow down or move into negative growth.

The latest figures from the HomeLet Rental Index reveal that nine out of twelve UK regions are still seeing rent prices rise on an annual basis, with the largest increases seen in Scotland at 8.4 per cent, the East Midlands at 7.7 per cent and Greater London at 6.6 per cent. The figures also show three regions in negative annual price movement, with prices in the North West 4.6 per cent lower than a year ago, 2.2 per cent lower in East Anglia and 1.4 per cent lower in Northern Ireland.

Every other region of the UK has seen rent prices fall modestly in the three months to September 2015, with the largest price reductions seen in the South West, the North East and North West at -2.4 per cent, -2.3 per cent and -2.2 per cent respectively. 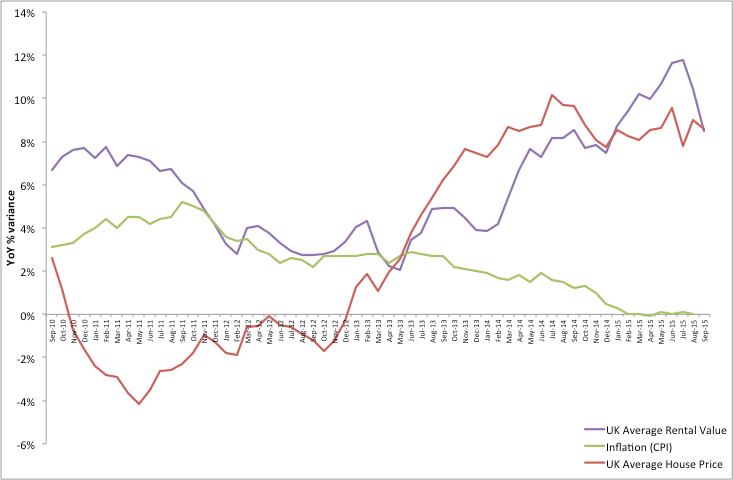 Commenting on the report, Martin Totty, Barbon* Insurance Group’s Chief Executive Officer, said:
"The UK economy has dipped into 'negative inflation' which is a boost to consumers' spending power and, ultimately, their real income. Affordability is an important factor in determining rents. Depending on what happens with inflation and real incomes over the coming months, could have a bearing on future rental price trends especially where, in certain areas of the country, the supply of rental properties is not keeping pace with demand from those wishing to be private sector renters.”