Recently, HomeLet asked a few children, ages 4 through 7, to sketch their dream bedroom. The submissions hilariously demonstrate how children let their imaginations run wild and speak directly to our desire to fill our homes with all our favourite things.

Martin Totty, chief executive of HomeLet said "The kids imaginations to create their dream bedrooms have been amazing!  The team have been loving each and every one of the submissions - keep them coming!"

They are brightly colourful, brimming with playful elements, and even includes monster traps. Like most people’s bedrooms, these feature the children's favourite elements including pets, toys and more.  Here are some of their favourites:

Mr. O’s dream bedroom features a river rather than normal flooring and he has his own submarine for him to ride in. Above the water is a platform that leads to climbing grips. Here, he can climb onto the next platform where his bed and toys are. Mr. O wants a slide at the end of his bed for him to slide directly from the bed into the water! 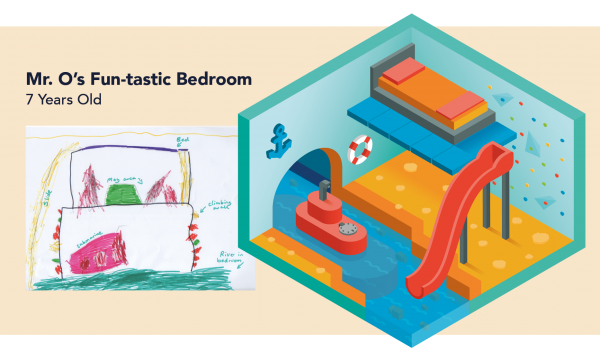 Aria’s room embodies how the sky’s the limit. Her bed floats on a cloud and the rainbow underneath it traps any monsters from going near. On her bed are her favourite teddy bear toys. Within the bedroom, Aria has also added a swimming pool for her to relax in and a dining table for her and her friends to gather. 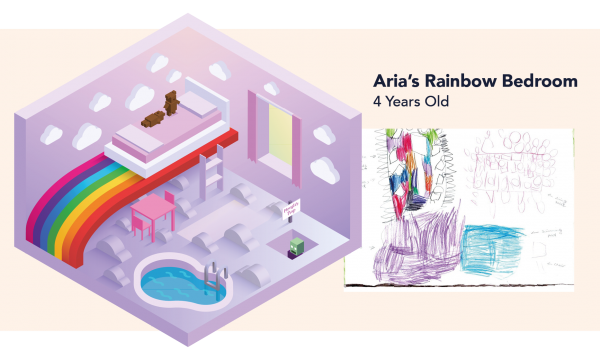 Mr. A has created a bedroom with an array of different elements. He wants a river to run along the floor of his room complete with submarines. In order to reach the bed, Mr. A suggests you can either use the climbing wall or trampoline from the toy castle into his floating cloud bed. In his bed, he can look through the glass ceiling and gaze at the stars and satellites. For his final touch, he added an edible cookie lampshade. 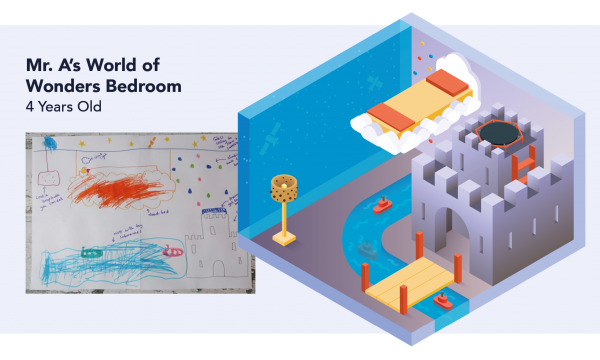 Alfie’s bedroom takes inspiration from the jungle. The walls are predominantly bright and dark green, with a feature wall displaying a rainforest mural and decorated with glow in the dark stars to guide his snake friends at night. He wants to have a cabin bed that fits in a jungle canopy and requires a ladder to climb into. Alfie also drew his pet snake, Crossbones, to sleep under his bed. The room is filled with all sorts of soft toy snake and tarantulas, with a jungle themed bookcase, to store all his Steve Backshall and reptile books in. 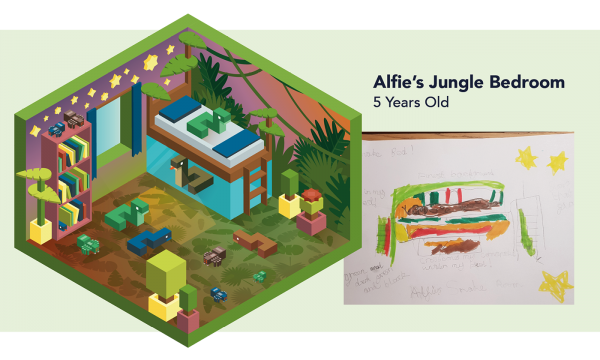 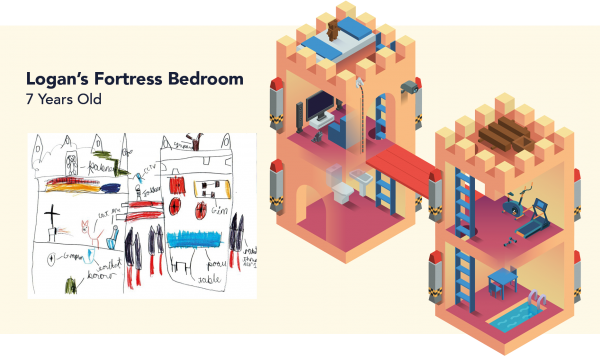 Logan’s bedroom displays all sorts of cool gadgets. Rather than a bedroom, he has created a fortress. The first thing you see when you enter the bedroom is his toilet. On the next floor, he can sit back and relax in his armchair to watch television with his pet cat. When you reach the top floor, you will find Logan’s bed and his favourite teddy bear, Jemima. There is a whole separate tower you can go to using the bridge on the second floor. It is extra safe as Logan imagines that it will have a CCTV to keep any intruders out. In the second building is where Logan has his dining table for friends to gather, a gym and a swimming pool. There are even rockets attached to the room so he can shoot up into space when he wants to go on an adventure.

Thank you to all the small artists who have contributed to the #MyDreamBedroom challenge so far.  Why not send in your Dream Bedroom designs for a chance to be featured?  Email: hello@homelet.co.uk with your creative ideas! 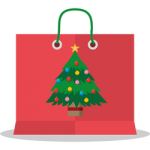 Simply get a tenants insurance quote from HomeLet today and we’ll automatically enter you into our Christmas prize draw. Be in with a chance of winning 1 of 3 amazon vouchers.