Rents in London fell for the first time since 2009 during April, new data from HomeLet reveals, as rental price inflation across the UK as a whole dropped to its lowest level for seven years. Rents in the capital were 1.2% lower in April than in the same month of last year, the April HomeLet Rental Index reveals, the first time that prices have fallen on an annualised basis since December 2009.

The slowdown in the capital, along with falls in the wider South-East England region, pushed rental price inflation down across the country. Rents on new tenancies signed across the UK during April were just 0.4% higher than in the same month of 2016 – the lowest figure recorded since February 2010.

April’s rental price inflation means that tenants signing up to a new tenancy last month agreed to pay an average rent of £904 a month, or £754 stripping out the Greater London market. In London itself, the average rent now stands at £1,519.

This reveals that the areas of the country were rents are rising more quickly are those that saw much less rapid rental price inflation during the first half of 2016, when prices in regions such as London, the South-East and East Anglia spiked sharply. In Wales, for example, rents were 2.2% higher in April compared to the same month of last year. 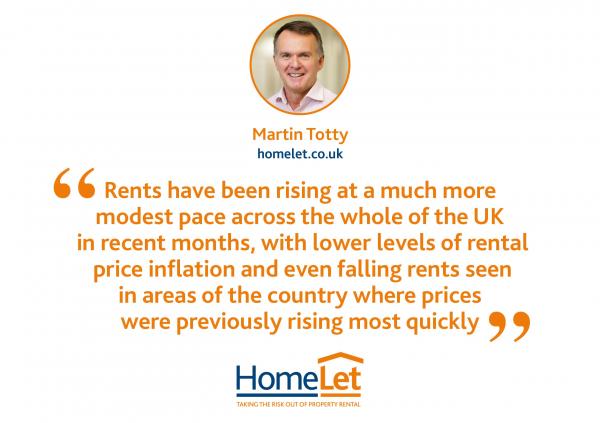 Commenting on the research, HomeLet's Chief Executive Officer, Martin Totty said: “Rents have been rising at a much more modest pace across the whole of the UK in recent months, with lower levels of rental price inflation and even falling rents seen in areas of the country where prices were previously rising most quickly. This trend is ongoing: we continue to see landlords’ and letting agents weighing tenant affordability considerations very seriously.”

About our data: HomeLet Rental Index provides the most comprehensive and up to date data on new tenancies in the UK. As part of referencing prospective tenants each year, HomeLet processes information including the rental amounts agreed, the number of tenants moving into the property, together with the employment status, income and age of all tenants. The trends reported within the HomeLet Rental Index are brand new tenancies which were arranged in the most recent period, giving the most relevant insight into changes in the Private Rented Sector. This is in contrast to many other rental indices which are based on all properties which are being managed, which may have had rental amounts agreed as long as two years ago.

Our survey of the UK’s tenants provides key insights into the UK’s private rented sector.