LATEST FIGURES FROM HOMELET RENTAL INDEX SHOW UK RENTS ON THE RISE AND LONDON RENTS EXCEEDING £1,500 PER MONTH FOR THE FIRST TIME

New findings from the HomeLet Rental Index show that rent prices in every region of the UK are now rising, an occurrence only seen twice previously in the history of the Index; once in October 2014 and once in December 2010. The Index also reveals that the pace of growth in London has picked up again, after a period of slower growth, with average rents agreed on new tenancies in May 2015 exceeding £1,500 per month for the first time.

The latest HomeLet Rental Index figures show strong growth in rent prices across the UK since this time last year, with all 12 regions recording price rises compared to the same period a year ago. Rents agreed on new tenancies across the UK in the three months to the end of May 2015 were 10.7 per cent higher than the same time last year, with the average now standing at £935 per month (£738 excluding Greater London).

The South West of England saw the largest increases, with average rent prices 13.6 per cent higher than a year ago. Scotland (9.6 per cent), the South East of England (9.4 per cent) and Greater London (9.2 per cent) also advanced strongly. 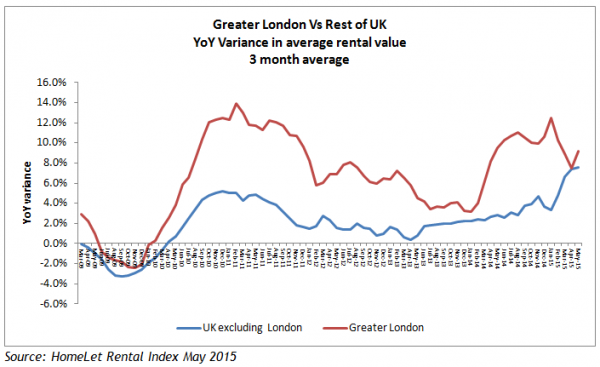 Commenting on the report, Martin Totty, Chief Executive Officer, Barbon Insurance Group, parent company of HomeLet, said: “Rental values are now increasing year on year across the country, with no exception. After a short period of London rents rising more slowly, when it seemed the rest of the UK may catch up or even exceed the capital in the speed at which rent prices were increasing, we now see the rate of price rises in London returning towards double digit growth, while the rest of the UK continues to rise steadily.” 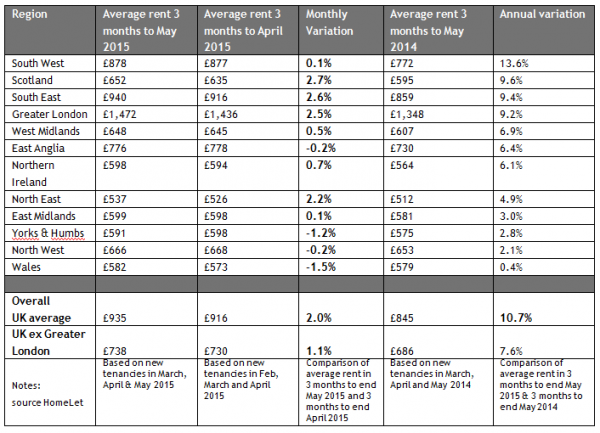 Martin Totty continued, “With the whole of the UK experiencing increases in rent prices agreed on new tenancies, it is possible this is an early indicator of a post-election private rental market where both landlords and tenants might expect rent prices to keep rising as demand continues to grow.”