New findings from the HomeLet Rental Index have revealed the highest and lowest growth towns and cities in the UK rental market during 2014. The HomeLet annual review of the rental market in the UK has identified hotspots in Leicester, Southall and Cambridge with average rents in 2014 being 45 per cent, 38 per cent and 24 per cent higher, respectively, than 2013. By contrast, rent prices have fallen by the greatest amount in Colchester, Croydon and Brighton compared to 2013, with rents on new rental agreements 24 per cent, 23 per cent and 18 per cent lower respectively in 2014.

The HomeLet Rental Index annual review has shown that on average, rents across the UK in 2014 were 6.6% higher than in the previous year with the average monthly rent in the UK now standing at £867. However, when analysed on a regional and local basis, the data reveals some marked differences in rental market performance.

HomeLet has ranked the major towns and cities in the UK to produce a league table highlighting the top ten growth hotspots and the bottom ten locations for rental market growth:

Commenting on the report, Martin Totty, Barbon* Insurance Group’s Chief Executive Officer, said: “2014 was predominantly a year for growth in the rental market with rental prices on average 6.6% higher than in the previous year. With property prices continuing to grow, and mortgage criteria tightening, the rental market represents a much more accessible option for house hunters than the property ladder. The demand for rental property is increasing, and we expect it to continue doing so in 2015 as large numbers of people are priced out of buying. As a result, we expect to see continued growth in rental prices across the UK as the new year progresses, particularly as real incomes are starting to rise.”

“However, the data also points to some big differences in rental market performance in 2014 from town to town and city to city. The causative factor behind these differences is as simple as supply and demand. In, locations such as Leicester and Cambridge, demand for rental property is outstripping supply. By contrast, Croydon and some parts of Essex are benefitting from a relative boom in new property building, easing the pressure on the local rental market and this is reflected by a drop in rental prices.” 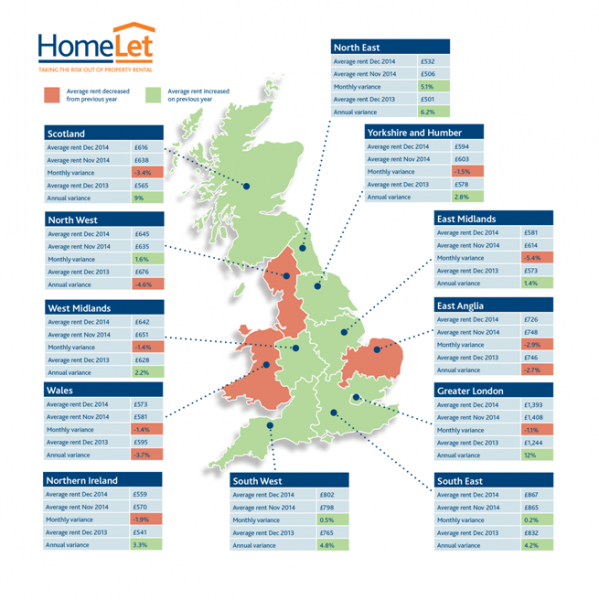