The cost of taking on a new tenancy in the private rentals market continues to rise, with the average rental agreement signed in the UK outside of London during the three months to February 2016 costing 4.8% more than in the same period a year ago, new data from the HomeLet Rental Index reveals. While that rate of appreciation was down on the 5.5% seen over the three months to January, rents on new tenancies continue to rise much more quickly than inflation in most parts of the country.

This trend may in part reflect the increasing number of families moving into the private rental sector as house prices have become less affordable and as people have pursued greater flexibility. The latest data from the Office for National Statistics reveals the number of privately rented homes let to families with dependent children has risen from 30% to 37% over the past 10 years.

The increasing number of tenants per property may also suggest people are more inclined to rent together after a sustained period in which rents have risen more quickly than general inflation: HomeLet’s data shows the proportion of new tenancies taken on by three tenants rose from 3% in 2008 to 8% by last year. Homes with four or more tenants accounted for 7% of the market last year, up from 2% in 2008.

The higher rents recorded by the HomeLet Rental Index mean the average rent on new tenancies signed during the three months to February 2016 was £1,521 per month in the capital - and £744 per month across the rest of the UK.

Rent rises in the London market are once again increasing, though remain below the double-digit increases seen last year: the average rent agreed on a tenancy in Greater London over the three months to February was 7.7% higher than 12 months ago, up from annual growth of 6.2% during the previous three-month period.

Commenting on the report, Martin Totty, Barbon* Insurance Group’s Chief Executive Officer, said: “We’re continuing to see the effect of the imbalance between demand and supply in the private rental market: average rents are still rising and while we are not seeing the double-digit increases recorded in some areas of the country during the summer of last year, the cost of a new tenancy continues to rise more quickly than general inflation.

“Our data on the number of tenants in each property gives a fascinating insight into the changing nature of the private rental market. Landlords are letting out homes to many more families, with rental property representing an increasingly important alternative to owner occupation; we’re also seeing people manage with higher rents by meeting the costs as joint tenants.” 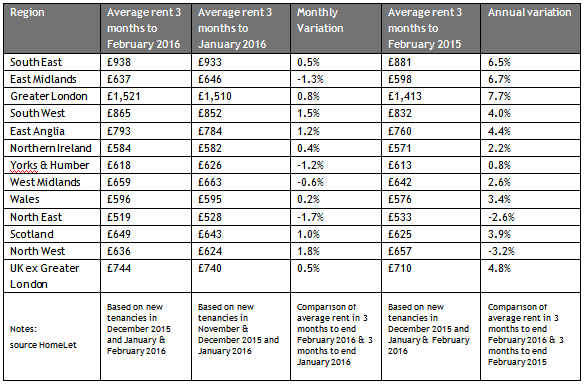