HomeLet data reveals cities where tenants are moving into the area, as rents rise across the UK

The HomeLet Rental Index, which provides the most up-to-date picture of the UK rental market, has analysed the movement of people who privately rent property, to and from the top UK cities by population. These new findings reveal detailed information including where tenants new to the area account for the largest proportion of new rental agreements. In the year to June 2015, the city with the highest percentage of new tenancies being signed by people moving into the area was Wakefield, with over a quarter (28 per cent) of new tenancies being signed by people moving to the city from elsewhere in the UK. It was closely followed by Coventry and Brighton.

The figures also show how the movement of tenants has changed since the recession began in 2008.

These are not necessarily the locations registering the largest quantity of incomers by number; however, they are the cities to which more people are moving as a proportion of new tenancies signed.

Some cities have seen significant increases in the proportion of new tenancies being signed by incomers to the area, since the recession. Wakefield and Coventry have seen these figures rise by 7 and 4 percentage points respectively since 2007/08. However, it is Greater London that has seen the largest increase, with 18 per cent of new tenancies signed by people moving in to the capital to rent, compared to just 11 per cent in 2007/08.

Movement out of the capital has also reduced since the recession, with the number of new tenancies signed outside of London by people who have left the capital dropping by 5 percentage points since 2007/08 from 17 per cent to 12 per cent.

The Index also reveals the UK cities in which tenants are most likely to choose to stay, by analysing the proportion of tenancies being signed by people who have previously lived elsewhere in the same city. It shows that Belfast, Cardiff and Birmingham, for example, are all popular with people who live there – more than 95% of tenancies in each of these locations were taken on by someone already resident in the area.

Commenting on the report, Martin Totty, Chief Executive Officer, Barbon Insurance Group, parent company of HomeLet, said: “The HomeLet Rental Index paints a fascinating picture: it reveals several hotspots around the country that are attracting and retaining tenants. For example, with its proximity to the burgeoning local economy of Leeds, Wakefield is an attractive and affordable location for tenants to move to. Meanwhile, cities such as Birmingham and Bristol appear to be ‘must stay’ locations, with tenants increasingly choosing to settle and stay in these cities, and continuing to choose to privately rent property in order to do so.

“While the London rental market continues to be popular, with the capital inevitably drawing in large numbers of people, it’s not the only part of the country attracting incomers, with tenants also choosing cities such as Nottingham, Brighton and Coventry.”

The HomeLet Rental Index figures for June 2015 show that rent prices across the majority of the UK are rising. The average rent price across the UK (excluding London) now stands at £747 per month for the three months to June 2015, an increase of 7.8 per cent against the same period last year, when the average UK (ex London) rent was £692 per month. 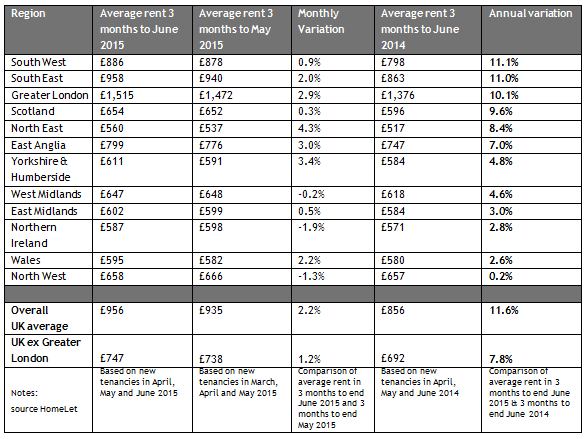 Martin Totty continued, “While London returns to a similar pace of rent price growth we saw for much of last year, the first six months of 2015 have also seen rent price growth outside of London gradually gather pace, with notable increases in the South East and South West of England in particular.