Rents across the UK continued to rise during May, but the rate of increase has slowed somewhat in recent months, the May HomeLet Rental Index reveals. The index, the most comprehensive data available on the UK’s private rental market, reveals that rents agreed on new tenancies across the UK over the three months to the end of May were up by 4.4 per cent compared to the same period of 2015. That compares to an annual increase of 5.1 per cent in April and 7.6 per cent in May last year.

The May data from the HomeLet Rental Index will provide some encouragement for both landlords and tenants.

Landlords may have been expecting some impact from the increase in the supply of rental property in May, as those who rushed to complete buy-to-let property purchases before higher rates of stamp duty came into force on 6 April 2016 began offering their properties to tenants. HomeLet’s data suggests landlords continue to enjoy healthy rental yields after costs.

As for tenants, they will be encouraged to see the pace of rent rises now beginning to moderate, particularly compared to a year ago. While an average rise of 4.4 per cent means increases are still running ahead of inflation, there is some evidence of moderation of the long term trend, perhaps as affordability ceilings are approached.

The slowing of the pace of rent rises in May is broadly in line with a similar cooling in the rate at which house prices are rising – and may be part of a broader story about economic uncertainty ahead of this month’s referendum on the UK’ s membership of the European Union.

Nevertheless, the May 2016 HomeLet Rental Index reveals that rents continue to rise in almost every area of the country, with 11 out of the 12 regions surveyed seeing an increase over the three months to the end of May.

In Scotland, rents are currently rising faster than anywhere else in the UK, with new tenancies costing 10.6 per cent more than in the same period a year ago. However, East Midlands, registering a rise of 8.3 per cent in rents compared to last year, is also showing strong gains. London’s rental market, where the average rent on a new tenancy is now £1,563, up 6.2 per cent, also continues to see rents rise more quickly than in most other areas of the country.

Commenting on the report, Martin Totty, Barbon* Insurance Group’s Chief Executive Officer, said:
“The May HomeLet Rental Index continues to show a rental market characterised by steady growth in rents as the number of tenants looking for property runs ahead of the supply in the market – that remains the picture in most regions of the country. While this growth has begun to slow, which tenants will welcome, landlords will also be encouraged by the vote of confidence in the sector evidenced by the increase in Buy to Let completions in the past few months.

“Short-term factors can and do have an impact on the marketplace – as a market leader in tenant referencing, HomeLet has seen a noticeable increase in the applications for new tenancies immediately after the rush to complete buy-to-let property purchases ahead of last month’s increase in stamp duty rates.

“Across the housing market, it may be that uncertainty ahead of this month’s European Union referendum vote is a factor – some people may even be choosing to rent rather than buy given the unpredictability of the outcome and its impact; as we saw at the time of the 2008 financial crisis, house prices and rents are not immune from wider economic shocks.

“However, looking beyond shorter-term factors, net population growth and the rising rate of employment remain the key demand-side drivers for residential property; they look set to continue to run ahead of public and private sector initiatives to increase supply and keep pace.” He concluded.

Rental figures from the May 2016 HomeLet Rental Index 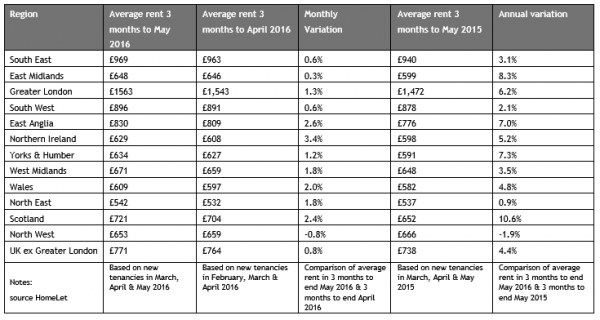 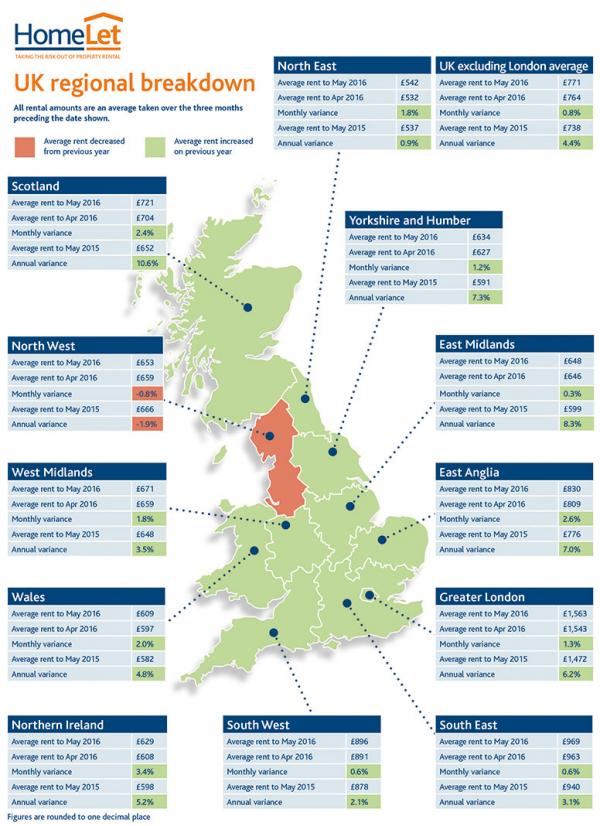