Rents across the UK continued to rise during July, building on the consistent increases seen during the first half of the year, new data from the HomeLet Rental Index reveals. However, the rate of rent growth continues to slow as we enter the second half of the year.

The index, the most comprehensive data available on the UK’s private rental market, shows that rents agreed on new tenancies across the UK (excluding London) over the three months to the end of July were up by 2.3 per cent, compared to the same period in 2015. In the capital, meanwhile, rents were 4 per cent higher.

The data suggests that landlords have been able to continue securing higher rents on new tenancies despite the economic uncertainties created by the UK’s vote to leave the European Union in June. It mirrors data from the housing market, with mortgage lenders also reporting modest growth in house prices in the month following the Brexit vote although many agree that is still too early to measure what affect Brexit sentiment has had on the market.

Looking forward, the fundamental forces in the private rental sector remain unchanged: Britain’s growing population, the relative unaffordability of house prices, and the lack of new homes being built combined with the reduction in social housing suggest that the private rental sector will continue to be an ever-important source of homes in the years and decades to come.

Commenting on the report, Martin Totty, Barbon Insurance Group’s Chief Executive Officer, said:
“Ultimately, rents will be determined by supply and demand in the private rental sector; what we know here is that population growth will continue to increase demand, and that the housing stock isn’t growing quickly enough to meet that demand. However, with rents ultimately limited to a tenant’s ability to pay, rents are likely to continue to climb, albeit at the slowing pace noted most recently.

“We won’t know exactly how Brexit is impacting the private rental sector and it will be several months yet until we see some clearly established trends in the marketplace. Expect to see some interesting insights from the HomeLet index in the months ahead. It seems likely that with lenders concerned about the prospect of falling house prices, loans to value in the mortgage market are going to become less generous, which may see more people turn to the rental sector rather than buying a property.

“However, it’s possible we may also see renewed interest in the London rental market as foreign investors seek to pick up investment property to make the most of the big exchange rate advantage following the fall in the pound. We may also see foreign investment increase outside the capital, in other cities across the UK. This coupled with recent figures showing that the number of people becoming homeowners is falling across the country, the demand for rental accommodation is likely to remain strong.”

Find out more about the latest HomeLet Rental Index data 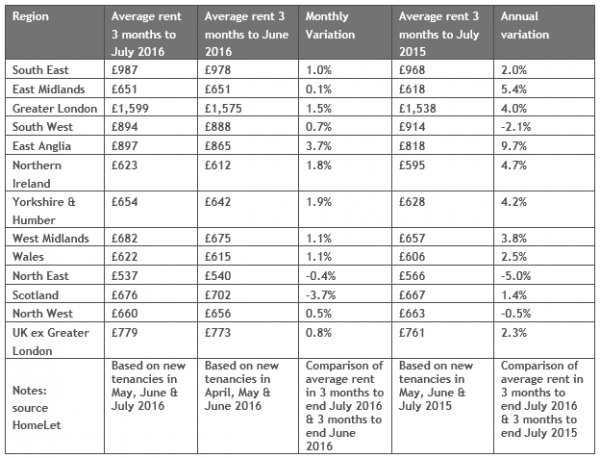 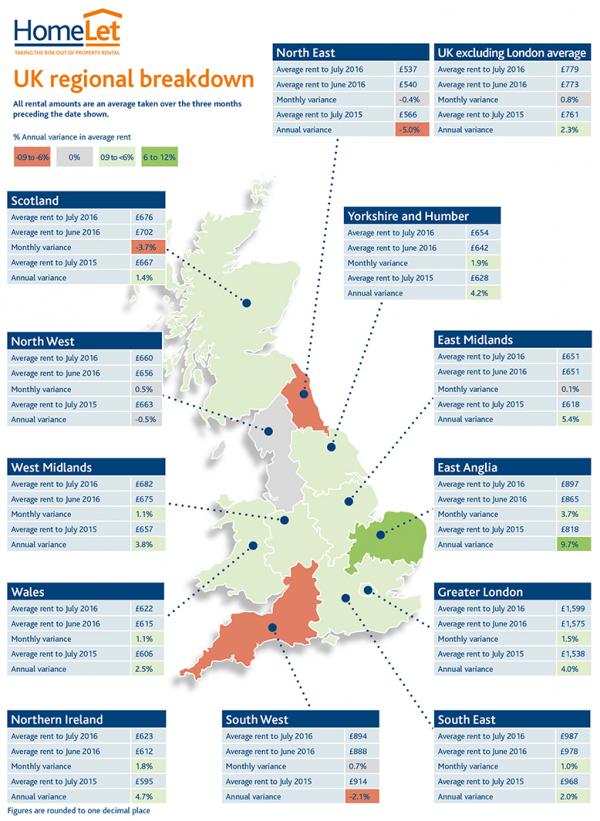 Data is gathered from HomeLet’s tenant referencing service, and rental amounts are based on actual achieved rent prices with accurate tenancy start dates in a reported month, rather than advertised costs. Up to 1,700 applicants are referenced every day, so information in the report is extremely comprehensive, accurate and up to date.