Rental price growth across the UK continued to ease in September, with twice as many regions in the UK seeing rental price falls than those recording an increase in rental prices, according to new findings released today from the September 2014 HomeLet Rental Index.

This month’s data from the HomeLet Rental Index, the largest monthly survey of private tenants in the UK, has shown a modest cooling in the rental market for the second month in a row, with UK regions such as Greater London, the South East, South West and East Anglia, that have recently reported large month on month price increases, moving to slower growth and a greater proportion of regions reporting negative price movement.

While the annual data still points to a rental market averaging largely positive growth, this month’s data has shown the number of UK regions recording annual negative rental growth doubling from two to four. Scotland, Wales, the North East of England and the East Midlands now show rental prices are lower now than a year ago.

Commenting on the report, Martin Totty, Barbon* Insurance Group’s Chief Executive Officer, said: “There can be an element of ‘seasonality’ to the rental market with September often recording marginally lower average prices than other months, perhaps due to the number of student letting agreements being signed at this time of year. However, with this month’s data being the second consecutive month of slower rental price growth, and house prices indices indicating a slowing of house price growth, which could suggest movement to a period of more settled rental prices, even in previously booming markets such as London and the South East.” 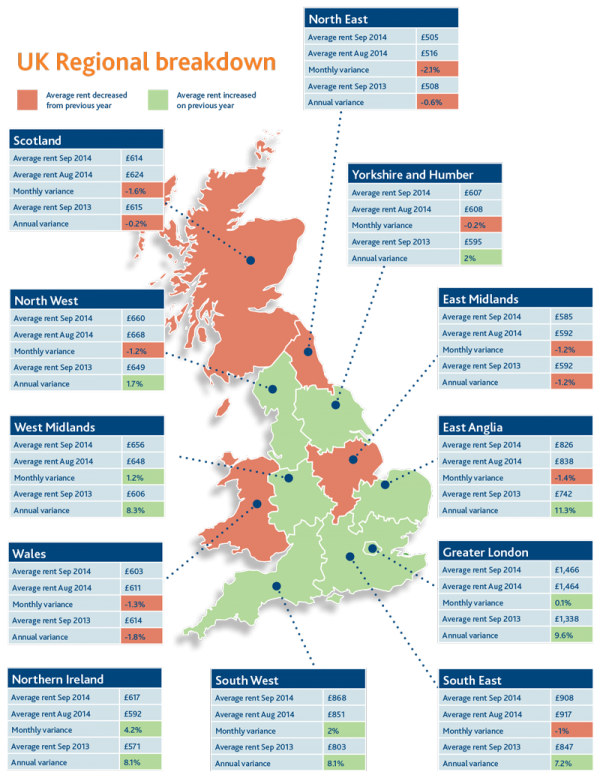 HomeLet Rental Index provides the most comprehensive and up to date data on new tenancies in the UK. As part of the referencing process for around 350,000 prospective tenants each year, HomeLet processes information including the rental amounts agreed, the number of tenants moving into the property, together with the employment status, income and age of all tenants. The trends reported within the HomeLet Rental Index are brand new tenancies which were arranged in the most recent period, giving the most relevant insight into changes in the Private Rented Sector. This is in contrast to many other rental indices which are based on all properties which are being managed, which may have had rental amounts agreed as long as two years ago.